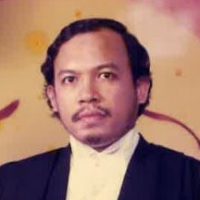 His father was a Religious Teacher and his mother was a housewife.

After obtaining excellent results for his Sijil Rendah Pelajaran (SRP), he continued his studies at the Klang Islamic College (KIK) which is now known as Kolej Islam Sultan Alam Shah (KISAS) until completing his Sijil Tinggi Pelajaran Malaysia (STPM).

Allahyarham Zulkafli continued to be successful in his studies and was accepted by Universiti Malaya (UM) with a scholarship awarded by RISDA. After four years, he graduated with a Bachelor of Laws (LL.B) degree.

He began his career by serving as a Legal Advisor to RISDA for about 10 years. Stepping forward, he continued his legal practice as an advocate and solicitor by working with few law firms as a legal assistant for approximately more than a year.

He finally opened his own law firm in 1996. During his career, he was actively working as a lawyer and has multiple partnerships throughout the nation.

He was very proud of his involvement in the legal field and was very committed to the job despite being in poor health condition.

He always said that his job as a lawyer is not just purely a career for him, but also his contribution and to serve the people.