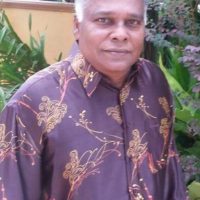 Ziraj Rizal is a Senior Advocates and Solicitor who had been in practice for Twenty-Two (22) years and was the founder and pioneer of Rizal Many & Logan. Ziraj Rizal. He was admitted as an Advocate and Solicitor of the High Court of Malaya in 1994 and started practicing ever since until the date of his passing.

Ziraj Rizal started off as a sole proprietor of the firm Ziraj & Co in 1995 and later the firm’s name was changed to Ziraj S.Many & Co and subsequently to Rizal, Many & Logan with the inclusion of two other partners.

Ziraj Rizal was appointed and served in the Bar Council Disciplinary Tribunal Panel in 1999 and was in the Malaysian Bar Disciplinary Board for many years.

He was a very passionate lawyer who took the profession’s ethics very seriously and had always manage to satisfy the professional needs of his clients. He was well respected by his fellow bar members, family, friends and those who had known him during his lifetime. He was a man who treasured principals over wealth. His generosity and sincerity in attending to clients’ case was what made them come back to his firm even after his passing.

Being raised in a relatively poor family with 10 siblings, with him being the eldest son in the family, he did all he can to change the status of the family by getting himself a good education whilst co-supporting his family. Prior to becoming a lawyer, he was attached under the Ministry of Health as a Medical Assistant and had received a Certificate of Excellent during his tenure.

The road of becoming a lawyer was not without thorns and pricks but he did not give up and kept going until he achieved what he aimed for.

He was a loving husband, a father of three daughters and a grandfather of 6 grandchildren. His last-born daughter is a practicing lawyer who was groomed under his wings and is now continuing the legacy of his legal firm as one of the Partner.

His passing was a sad lost to all his family members, friends and those who have known him during his lifetime. He will forever be missed and remembered. His passion will forever light our way. His memory will forever be with us.

To the Honourable Yang Arif – Yang Arif, KLBC Representatives , Members of the

Bar, Aunty Sham , Miss Merdiana and members of the family of Late Mr.Riraj

I would like to express my sincere condolences on passing of our senior Member of the Bar and who is also my uncle late Mr.Ziraj Rizal Bin Abdullah from Rizal Many & Logan

The late Mr.Ziraj Rizal was the first son for late Mr.Palanisamy and Mrs Grace who born on 8.12.1949 and also the responsible brother for his nine siblings. He completed his secondary school at MBS Sentul and started his career as Hospital Assistant (HA) at Klinik Subang Jaya.

During his early career, he found a beautiful soul to be partner of his life, Aunty Sham and he was gifted with three beautiful daughters.

The late Mr.Ziraj Rizal was an inspiration to many lawyers where he proved that age and time does not matter to pursue law. During the period of pursuing his law degree, he was working as a Hospital Officer (HO) and he was married with three kids. His wife Madam Sham had supported him and being his pillar for his successful path of his journey. He was the pride of our family.

He was highly respected throughout this community, profession and family. He was the first one who graduated in law in our family. He was the inspiration to his daughter Ms. Merdiana, to myself and also to our youngest law graduate of the family, Mr Renessh Thanbala to succeed in this legal profession. It was my honour to assist him in few cases before he left us. His absence is very difficult for all of us to absorb.

Though he is not here with us anyone and though no one can fill the void his death has created in our lives, I wish the Almighty is always there to bless your family, to give his beloved family strength to recover from the deepest sorrow. Let us always keep him alive in our memories and celebrate it to keep him a part of lives forever. The late Mr.Ziraj will be always remembered as a great lawyer and a kind person.

To the other respectful family of the departed members of the bar who is here today, please accept our heartfelt condolence for the loss of your loved ones. Death brings about a sudden and painful parting but the one who left us is free from the pain and worries of this mortal existence. It is we who suffer and feel the loss. By the grace of Almighty, the parting souls will be reunited in the Gardens of Heaven.

Written By,
Family of the late Ziraj Rizal bin Abdullah