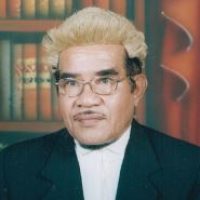 Allahyarham Zainal Abidin Abdul Rahman was born to Ara Harun and Abdul Rahman Ujang in Kg Tengah, Kuala Pilah. As the son of a KTM Station Master, Zainal spent his teenage years living in Railway Quarters Seremban and studied at King George V School where he obtained his Cambridge School Certificate in 1954.

A few years after he left school, he took the Examination for English School Teacher and became a teacher in Jelebu. He then enrolled into Co-Operative College of Malaysia and continued his service to the government as a Co-Operative Officer in 1963 with Jabatan Kemajuan Kerjasama. It was after 11 years, a short stint in Cairo and three children in tow that he took the first step to pursue his dream.

He sat for the Malaysian Civil Service Law Examination in 1974. Fuelled by passion, Zainal left his position as Senior Co-Operative Business Officer and went to England to pursue a law degree at the age of 40. Five years later in 1980, he graduated from the University of Buckingham with a Bachelor of Law. Zainal passed the CLP Examination and completed his required pupillage in 1982. He was called to the Bar at Lincoln’s Inn in the same year and was enrolled as an Advocate and Solicitor.

Having completed his chambering with Bernard & Co, he founded his own firm called Zainal & Partners in Pulau Sebang, Tampin which was then relocated to Seremban in 1987 where he specialised in land matters. He spent his later years in practice with Messrs Nassir Hafiz Nazri & Rahim Seremban, before joining Messrs Zain & Nazri as a partner. Zainal remained in legal practice for over 35 years. For every one of those days, he enjoyed coming to his office to read, discuss, debate and learn new things. One of his more memorable quotes was, “being in a legal office is to learn and experience new things every day, and this makes me feel young”. True to his word, he never stopped learning. Even at the age of 57, he enrolled himself in Diploma in Islamic Studies at the International Islamic University. Until the ripe age of 80 he was still an active legal practitioner and still enjoyed reading law books and journals.

Zainal was survived by his four children. For his family, Zainal is truly an unsung hero who had dedicated his life towards helping people, family, acquaintances and strangers, where he had always placed other people’s needs before his. He will be remembered for his generosity, kindness, positive attitude, and his love for good oldies music. The sight of him working on his carpentry and reading English Literature late into the night surrounded by books will surely be missed. The dedication in pursuing his dreams, his drive and thirst for knowledge is a great story to bring home to his grandchildren and generations to come.

“My grandfather was a very lovable man. He was caring, and he loves buying presents for his grandchildren. He would make me feel happy whenever I felt gloomy particularly when it comes to my exam results. If I were to write the memories I had with him it’ll take days for me to finish for there were too many of them. For me he’s the best grandfather in the world. Dear grandfather, in my heart is the memory and there where you will always be. I love you.”

“Mr Zainal as we knew him was an enthusiastic person and very dedicated towards his work. May Allah bless his soul and grant him Jannah with the mukmins. Al-Fatihah”.