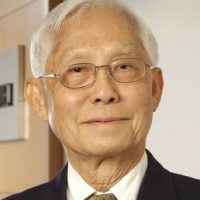 We note with deep regret the passing of Mr.Wong Sai Heng on 31 March 2019 in Kuala Lumpur, shortly after his 87th birthday and within a year after the passing of his beloved wife, Olive Wong. He leaves behind his son, Wong Tat Chung and daughter-in-law, Patricia Toh Kim Lee, both also Advocates & Solicitors and his grandchildren, Tze Wei and Li En. He had cancer for many years but had been able to lead a healthy and fruitful life up until nearly the end of his life. It was only after the passing of his wife in 2018 that his health declined significantly. Even then, I understand from his son, Tat Chung that his acuteness of mind remained almost to the very end.

Mr. Wong was born in Perak in the 1930s, the youngest of four siblings. His father passed away while he was young and his mother passed away while he was still pursuing his legal studies in England. I am informed by his family that a cousin of his described him as someone who spent much of his time reading even at a young age. His education was disrupted by the Japanese occupation of Malaya in the Second World War. He resumed his studies at St Michael’s Institution in Ipoh where he was a leading student in the Senior Cambridge Examinations.

“WONG SAI HENG: The First boy in the class. School Prefect. A studious young man who is a favourite with the others. Prize winner in SCIENCE, GEOGRAPHY, LITERATURE, SCRIPTURE. Winner of Chin Sem Lim Scholarship.”

He became a lawyer almost by accident. He had applied to the University of Malaya in Singapore for a degree quite unrelated to law but was rejected as the application had arrived late. Someone then suggested that he might try the Bar Examinations in England which he did and off he then went to England. He was admitted as a Barrister-at-Law, Lincoln’s Inn in the 1950s, returning to Malaya where he was admitted as an Advocate & Solicitor of the High Court of Malaya on 23 September 1955. In later years, I understand that he was also admitted as an Advocate & Solicitor in Singapore.

Upon his return from England, he underwent pupillage with Mr. T.K. Sen in Kuala Lumpur where he was admitted. Later, he joined the Royal Malayan Customs and Excise Department as a cadet officer before joining Lim Kean Siew & Co in Penang as a Legal Assistant. In 1967, he joined Presgrave & Matthews as a Legal Assistant at the behest of his friend, Mr. Chong Kah Keng, who was a partner in Presgrave & Matthews at the material time. He became a partner in Presgrave & Matthews in 1969. His partners at Presgrave & Matthews included amongst others the late Tan Sri Eusoffe Abdoolcader. He became senior partner of the firm in 1991 upon the retirement of Mr. Ian Kingsley Meek. On 31 December 2001, he retired as a partner of the firm and from 1 January 2002, continued as a consultant with the firm until December 2002. In 2003, he relocated to Kuala Lumpur to join his son, Wong Tat Chung as a Consultant in the firm of Wong Beh & Toh and remained in that capacity until his death. At the time of his passing, Mr. Wong was the second most senior practising member of the Bar.

I am informed by Tat Chung that Mr. Chooi Mun Sou, an old friend of Mr. Wong and another very senior member of the Bar, had once described Mr. Wong as someone who was always calm and never easily excited. Having known Mr. Wong for more than 30 years myself, initially as a Legal Assistant and subsequently as a Partner at Presgrave & Matthews, I can attest to such an observation.

Mr. Wong spent the bulk of his legal career in Presgrave & Matthews in Penang. He was a very respected and well sought after conveyancing lawyer in Penang. He commanded the utmost confidence from his clients who knew that they could rely on his meticulousness and in-depth knowledge of the law.

He was thorough in his work and took pains to train the pupils and young legal assistants to be good conveyancers. However he did not believe in providing his pupils and lawyers with easy answers and would insist that they researched their answers to legal problems before discussing them with him.

Mr. Wong also presented a paper in respect of Equity In Malaysian Land Law at the Malaysian Law Conference organised by the Bar Council in 1991.

In conclusion, whilst we are gathered here to pay tribute to the late Mr. Wong Sai Heng, we are also here to celebrate his life, his many contributions and achievements both personally and as a professional. Mr. Wong will not be forgotten by all those whose lives he had touched including his family, his brothers/sisters-at-law, his friends and clients. He will continue to live in our hearts and minds.