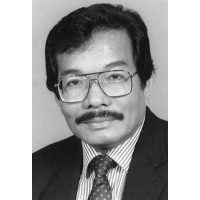 Born in the year 1938, the late Wan Abdul Majid B. Wan Hamid was brought up in Kelantan. He had his early education in an English school and obtained a first grade in the Overseas School Certificate in 1957.

His first employment was with the Education Department, Kelantan where he worked as a General Clerk in 1957. Thereafter, he applied for a post in the Kelantan Civil Service and in 1960 was appointed as an Assistant District Officer, Bachok where he served for 3 years. He was then transferred to Pasir Mas, where he served for another 2 years. His last posting was in Tumpat before he was seconded to the Legal Department. It was here that he developed a keen interest in law and decided to pursue the subject further.

In 1966, he secured a scholarship to read Law in the United Kingdom. He was there for 3 years. Upon being called to the Bar at Middle Temple, the late Wan Majid returned to Malaysia. Upon his return, he joined the Judicial & Legal Service where he held several positions, he was a Magistrate, a DPP and a Sessions Court Judge in Kuantan.

Due to health reasons, he was retired in 1980. However, due to his passion for the subject and equipped with his experience, he decided that it was still too early for him to retire. He then went into private practice with another partner forming the firm of Wan Majid & Mano.

As an advocate & solicitor, he was well respected by his colleagues and peers. This was largely attributed to his natural ability to analyse problems and to resolve them. To him, everything he took on was not a “problem”. Instead it was a challenge and he always found a solution to everything. He seemed to love these challenges and that was what kept him going even when his health took a toll for the worse. He took his work seriously, was overly concerned for details and was orderly and very organised.

On a more personal note, he was a very jovial and well read person, keeping in touch with current developments. His reading interest would include politics, fitness, golf and medicine. If someone had met him for the first time on a golf course or a hospital, he would probably mistake him for a professional golfer or a medical doctor based on the knowledge he had acquired in these two fields.

This trait of his also filtered to his family. As head of the family, he was fun, loving, caring and a disciplinarian. He always gave his children guidance and support. He would always tell his children to do the best they can. As a father, he had provided and prepared his children well to face the real world. He passed away on 12 July 2002 and his legacy will continue.