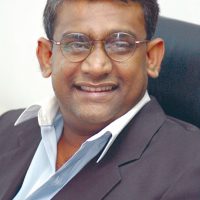 What has befallen on me is indeed a melancholic duty to say a few words in tribute to the memory of the Late Vinayaga Raj Rajaratnam who had been one of the Leading Lights of the Bar of this Court as well as of the Court of Appeal and of the Federal Court for more than two decades until his unexpected passing on at the comparatively young age of 56 years on 24 August 2020.

Born and raised in Klang, Selangor, he had his primary and secondary schooling at one of the oldest schools in Selangor, the Anglo Chinese School (ACS) in Klang. After completing the School Leaving Certificate, he continued his studies for the A Levels at Kolej Damansara Utama (KDU). He had good enough results to obtain a place to read Law at the University of Manchester in England where he obtained his LLB degree with Honours. He went on to pass the English Bar final examinations and was admitted to the Bar of England and Wales from Lincolns Inn on 21 November 1989.

In ACS Klang, he was affectionately known as “Vinag” to his peers, friends and teachers. He was an ardent cricketer. In cricket his forte was opening – to hold one end and frustrate the bowlers. By the age of 14, Vinayaga Raj was representing ACS Klang for the Combined Schools of Selangor and later Majlis Sukan Sekolah Selangor. Besides opening the batting, he occasionally kept wicket. Vinayaga Raj went on to represent his school at State Level Tournaments including the Lall Singh Trophy games and for the Vanderholt Trophy and was selected for U19 Talent Camp (Kem Bakat) organised by the Malaysian Cricket Association. In 1983, he was selected to tour India with the Selangor Youth Squad.

Hockey was another sport that Vinayaga Raj excelled in. He was selected to represent ACS Klang in the Klang District Open Hockey tournament. Besides excelling in cricket and hockey, Vinayaga Raj had demonstrated outstanding oratorial skills which secured him a position in ACS Klang’s Debating Team. In the Upper Six, he was the President of VGC – Vocational Guidance Council, where his organisational skills and leadership qualities came to the fore. I am told that even then he was admired for his sincerity, his loyalty and his dry sense of humour.

It was at this time that Vinayaga Raj lost his father. He was all of 19 when his family was dealt with this unexpected blow. It is however a testament to the steadfast quality that Vinayaga Raj came to be known for that he very quickly became a man shouldering responsibility and ensuring that his mother and his younger sister, Malathi were taken care of. It was in these circumstances that he made certain that he did well enough to read Law at the University of Manchester and got through the gruelling Bar exams in one sitting.

Upon his return from his studies in Manchester and on completing his pupillage in Skrine, Vinayaga Raj was admitted as an Advocate and Solicitor of the High Court of Malaya on 8 December 1990. He commenced legal practice in Skrine in 1991 where he went on to have a distinguished career particularly in litigation, in commercial, corporate, banking and finance and insolvency litigation. He went on to become a partner in Skrine in 2000.

He did Skrine proud – he was a lawyer with integrity, principles and a strong desire to always do the right thing. The legal community knew him as a learned friend who was quick with a witty line. Vinayaga Raj was a capable and formidable advocate who had the skill of grasping the essence of the matter before him and for resolving disputes quickly. He was a master negotiator, known to be able to settle matters for the client without drawn out unnecessary litigation.

He was named as a “Leading Lawyer” in insolvency and restructuring by Asia Law Leading Lawyers in 2009, 2010 and 2011. He was listed in the International Who’s Who of Business Lawyers (Commercial Litigation) in 2012 and 2013. He was an accredited mediator and a member of INSOL, the International Association of Insolvency Restructuring Practitioners. He was included in Benchmark Asia Pacific 2013 as one of the ‘preeminent’ litigation practitioners in Malaysia.

He was unreservedly loyal to Skrine and proud of being part of the firm. Behind Vinayaga’s tough talking exterior, there was a gentle caring soul, taking the time and trouble to counsel staff and lawyers in the Firm. He gave practical and achievable advice and uplifted those who were down (including diagnosing a whole host of medical ailments and conditions and recommending what to do and the medication to take!)

He was active in promoting his firm internationally through the Pacific Rim Advisory Council where he was co-chair of the Dispute Resolution Committee. In the many heartfelt messages received from the wider international legal community on his passing, it can be seen that Vinayaga Raj had left even there an indelible mark. I can do no better than read out one of the messages received,

“Some persons who come into our lives are larger than life – Vinayaga was certainly one of them. Even though he is no longer with us, he remains with us for all that he has done, shared with us and his warm, helpful, friendly, extremely likeable and cheerful disposition. He was a man of strong principles, a decent degree of discipline and hard work ethic and diligence. He achieved a lot and yet remained humble. Most of all, he was a loving, devoted and doting husband and father.”

Above all else, he cherished his wife and his sons. This was evident to everyone. In April 2003 he persuaded the beautiful Komala Veloo, herself a distinguished member of the Bar practicing at the firm of Shahrizat, Rashid & Lee to marry him. Vinayaga Raj and Komala were blessed with two children, Karthik and Rahul.

Vinayaga Raj was a hands-on father and was very much involved in the bringing up of the boys. Regardless of his busy schedule he would make time to attend concerts and sports and award days related to the boys. Inter alia he taught them his two passions – cooking and cricket. He actively supported his sons’ pursuit in cricket both at Kuala Lumpur level and country level. He travelled to Chiang Mai, Thailand in April 2019 where Karthik played in a tournament and later to Shandong, China in October 2019 where Karthik captained the winning Malaysia team in the Inaugural Belt and Road China U16 Boys Cricket International Tournament. Vinayaga Raj made the boys’ dream come true by taking them to the Cricket World Cup in Manchester in 2019. That was a trip of a lifetime. In Manchester he also took them down memory lane to all the favourite places of his student days but perhaps not to his favourite pubs!

With both his sons inheriting his love and talent for cricket, Vinayaga Raj found himself playing an active role in support of the Royal Selangor Club Junior Development Programme. Vinayaga Raj was also a member of the Tamilian’s Physical Cultural Association (TPCA) and of the Selangor Turf Club. Vinayaga Raj’s involvement in cricket took a more formal role when he was elected as a Committee Member of the Kuala Lumpur Cricket Association in 2016, serving in various capacities with the KLCA. He was a Committee Member in 2016 & 2017, Honorary Treasurer in 2018 and 2019, and Honorary Secretary in 2020.

Nothing gave Vinayaga Raj more pleasure than being surrounded by family and friends. Being an accomplished cook, he would regularly cook delicious meals for everyone. He hosted many wonderful gatherings in his home where he would entertain family and friends with his warmth, effervescent personality, hilarious stories, and anecdotes while serving them lavish home cooked meals. Vinayaga Raj was a great mimic. His forte was the Mamak Magistrate holding forth in English with a thick Mamak accent. That was almost as good as his rendition of his Kerala trained Malayalee Maths lady teacher, teaching trigonometry in Bahasa Malaysia with a broad Malayalee accent!

Another special quality of Vinayaga Raj was his enormous love for children. Children adored him as clearly seen in his interaction with a host of nephews and nieces whom he helped raise. He was a kindred spirit to them and much loved. He had an extensive range of contacts, family, friends and acquaintances from school, from sporting activities and from the legal fraternity.

Being a deeply religious person, he would make regular visits with his family, to temples both in the Malaysia and in India. Whether in the hallowed temple in Thirupathi or the ancient Saraswathi temple where Karthik and Rahul wrote their first alphabets in the sand, he taught his boys the importance of the faith and prayer, and that family and togetherness were the greatest blessing.

Vinayaga Raj leaves behind a huge legacy of kindness, generosity, and love. He fulfilled his many roles as beloved husband, caring father, devoted son and brother, brilliant lawyer, talented chef, and a generous host. We will always remember the extraordinary full life he had led, his wit and his endearing smile.

The sand of time

Where the billows break no more nor the tempest roar”

My Lord / My Lady, our individual faiths should help us believe that,

“The souls of the righteous

Are in the hands of God

There shall no evil come to them

There they are at peace”

I respectfully move that a record of this reference be kept in the archives of the Court and a copy thereof be provided to the family of Vinayaga Raj to whom we have in our inadequate way paid tribute this morning.