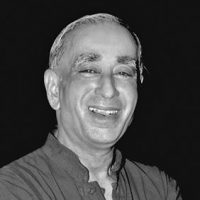 The late Mr Venu K P Nair was called to the English Bar on 24 November 1981 and to the Malaysian Bar on 30 October 1982. He held a Degree in Law with Second Class Honours and was also a Barrister-At-Law of the Honorable Society of Lincoln’s Inn.

Mr Venu Nair was in active practice for about thirty-three years. He set up the sole-proprietorship firm of Venu Nair & Co in mid-1985 and practised under that name until about mid-November 1999. In mid-December 1999 he joined the firm of Paul Cheah & Associates as a partner at its Kuala Lumpur Branch. From the year 2015 until his passing away on 12 August 2016, he was practising as sole proprietor under the firm name of The Chambers of V Nair.

During his thirty-three years in practice, Mr Venu Nair was very actively involved in civil litigation, both commercial and otherwise. He had also appeared in a few criminal cases where acquittals had been procured.

Over the years, Mr Venu Nair was very actively involved in banking litigation wherein he had represented both individuals and corporations, in numerous suits instituted against them by banks and financial institutions.

Mr Venu Nair has prosecuted land matters both at the High Court and Federal Court level. He also resisted foreclosures and winding up proceedings.

Mr Venu Nair was very familiar with the litigation aspects of law in relation to hire-purchase and banking and represented clients in litigation concerning such matters on several occasions.

Mr Venu Nair appeared in all the Courts and have made several appearances in the highest Appellate Court in the country.

Despite being predominantly a litigation lawyer, Mr Venu Nair was also experienced in conveyancing work having drafted, perused and vetted agreements in relation to both conveyancing and corporate matters.

Mr Venu Nair was a committed and dedicated lawyer who gave his best to whichever case he was working on. He enjoyed the challenges of his career and was true to his calling. It can safely be said that he lived and breathed the law. He is survived by his wife Thangam K Ramnath, daughter Priyadarshini and son Vikraman.

My father Mr Venu K P Nair was not just a kind, gentle and loving father to my brother and me but also someone who always placed the needs of others before his own. He was a passionate lawyer and I believe a credit to the legal profession. My father who we called “Acha” had a good sense of humour and was always full of entertaining stories. There was never a dull moment with Acha around. His love for the law was undeniable and the passion with which he spoke about it captured our attention each and every time. He will always be remembered and deeply missed by all those who knew him and loved him. We love you very much Acha and the sweet memories of you will live on forever in our lives.