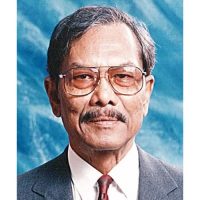 Born on 6 June 1927 in Kuala Terengganu, Tan Sri Dato’ Seri Haji Mohamed Yusoff had a long and illustrious career in the judicial and legal service. He started work during the last years of the British Colonial era in the Terengganu Civil Service in 1949 as an Assistant District Officer and later as District Officer until 1956 when he was seconded to the judicial and legal service as a magistrate.

In 1958, Tan Sri was awarded a scholarship to read law at Lincoln’s Inn and qualified as a Barrister-at-Law in 1960. He returned to Malaysia and was appointed as President, Sessions Court, Raub. In 1962, he was called upon by the State of Terengganu to serve as the State Secretary, Terengganu. In 1965, he returned to the judicial and legal service and served as President, Sessions Court, Johor Bahru.

In 1968, Tan Sri was promoted to the post of Senior President, Sessions Court, Kuala Lumpur from where he was transferred to the Attorney-General’s Chambers where he served as Acting Senior Counsel, Deputy Parliamentary Draftsman and later on as Senior Federal Counsel heading the Advisory Section. In 1971, he was appointed as State Legal Advisor, Selangor and held the post from 21 June 1971 until his elevation to the Bench of the High Court on 16 January 1974.

Following a long and distinguished career on the Bench at the High Court, Tan Sri was elevated to the Supreme Court of Malaysia on 29 October 1988 where he retired at the pinnacle of the judicial profession in September 1992.

Not content to slide into a well-earned rest and spend time with his children, grand children and hobbies, Tan Sri instead plunged into the corporate world. He served as Chairman and Director for several companies both in Malaysia and Singapore including NTI International Ltd. (a Singapore Stock Exchange SESDAQ listed company), Dataprep Holdings Berhad, Dunham-Bush Berhad, Hwa Tai Industries Berhad and Berjaya Sports Toto Berhad (companies listed on the Kuala Lumpur Stock Exchange). He was also the Executive Chairman of Zenecon-Kumagai Sdn Bhd, a joint venture Japanese-Malaysian construction company, and Chairman of New Technology & Innovations Sdn. Bhd. (an MSC Status) IT based company.

Tan Sri was married to Puan Sri Datin Hajjah Rosita Harisun Binti Haji Daud and was blessed with eight children. Tan Sri passed away peacefully on 4 March 2009 with his children and wife at his bedside. He was 81.

Rita Hartini Yusoff, Advocate & Solicitor, High Court Malaya and in part taken from the Speech by the late Dato’ Ronald Khoo Teng Swee, Esq. moving the Petition of the late Tan Sri Dato’ Seri for Admission to the Rolls of Advocates & Solicitors on 9 August 1997