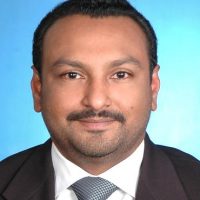 Suraeisan S.T. Mani or Suresh, as we fondly remember him, left us quite suddenly at the age of 46 in the early morning of 30 January 2014.

A son, a brother, a husband, a father and a loyal friend – Suresh was all these things to all the people who knew and loved him.

Suresh was born on 5 June, 1967 in Tapah, Perak. He was the long awaited son that his parents S.T. Mani and Saradambal prayed for, arriving 14 years after his three sisters. It is said that when a child is born, he brings with him multiple blessings to the family and this was certainly true for Suresh – for it was in the very month of his birth that his father S.T. Mani became a Senator.

Senator S.T. Mani served for two terms and was the General Secretary of the MIC for the State of Perak serving alongside Tun Sambanthan. Sadly for Suresh, he lost his father when he was only seven but as a child and even in adulthood, he was spared nothing by his doting mother and three sisters and he was literally called “the King” at home because his birthday usually coincided with the annual birthday celebrations of Malaysia’s Yang Di Pertuan Agong.

In school, Suresh excelled academically, where he was given the award of being the best overall student by the time he completed his secondary education and in sports where Suresh represented Perak in football in the under-21 age group.

After leaving school, Suresh joined the police force briefly before he left to further his studies in India, leaving his mother and three sisters behind dreaming of “Dr. Suresh” coming home. Suresh however had a very different path that he charted for himself. He had a fascination for planes but was unable to become a pilot because of poor eyesight as “lasik eye surgery” was not available then. So instead, he signed up for a course in Aircraft Maintenance at the Indian Institute of Technology in Madras. Upon successfully obtaining a Diploma and fuelled further to pursue this journey, he then completed his A-levels and left for the UK – waved goodbye by his family who now dreamt of “Engineer Suresh” returning. In the UK, he pursued a degree in Aeronautical Engineering, gaining a degree from the Imperial College of Science and Technology in London.

The journey of discovery however did not stop there. During his time in London, Suresh worked to support himself so as not to burden his family. Whilst working, he lived with a group of Malaysian boys in London who were also working part-time as they studied law at Holborn College. He got a job at Holborn Law Tutors, Publications Division, where text books, summarised notes and past papers for the University of London, external degree were being despatched to international students doing their distance learning programme. Flipping through the books whilst he worked sparked a curiosity for the law and so he signed up to read law at Holborn College.

He successfully obtained his Law degree from the University of Wolverhampton in 1996 and his mother and sister travelled up from Malaysia to witness his convocation. Most Asian and definitely Indian parents dream of a son who becomes a doctor, engineer OR lawyer. In Suresh, his mother raised a son who achieved two out of the three – kudos to her, a single mum with nothing but her husband’s pension and a smart wit to guide her.

Suresh stayed on in the UK to complete his Bar Exams and in 1998 he was called to the English Bar (Middle Temple). Upon his return to Malaysia, he read as a pupil in the Chambers of Henry Lim & Co in Ipoh. After being called to the Malaysian Bar, Suresh worked with several firms and partners and eventually in 2013, he set up his sole proprietorship, Messrs Suraeisan, where he practised law up to the time of his passing last year on this very date.

Suresh was a man of many seasons. He was bold, fearless and an adventurer at heart. Unable to rest on his laurels, he embarked on several business ventures since his return to Malaysia. Most notably was a pub he operated in Sunway where he crossed paths with travellers from around the world who stayed at Sunway Hotel across the road and locals who came by after work for a quick drink to wind down. Many happy evenings and occasions were celebrated with family and friends at the pub, as were many rowdy and enthusiastic football matches. Residents in Subang Jaya still talk about the authentic South Indian cuisine from his other business venture – Ammachees’ Restaurant, where the idlis’ were fluffy, the capatis were soft, the thosais’ crispy and the curries to die for. “Ammachees” was the first choice for a good Indian meal for the residents in Subang Jaya and his family will tell you that Suresh’s love for good food and his refined palate influenced every single dish that was served at Ammachees.

As you would no doubt have gathered by now, Suresh was a man of many roles, all of which he played excellently. As his friend, I remember his passion for football and it would be amiss of me not to mention that he was an ardent supporter of Manchester United. In the parlance of that beautiful game, I can safely say that he provided a solid defence. He was supportive, loyal and steadfast to his loved ones and dear friends. He never failed to rally his friends round by encouraging those in need especially when things appeared grim or the hope of achieving something had begun to waver. For me personally, I knew that he had my back when things got tough.

As remarkable as his many achievements were, he used to tell his friends that his greatest achievement was in marrying his beautiful wife Renu, who he met at Holborn College and then being blessed with his lovely twins Vishnu and Lakshmi.

A quiet man of few words he was to many, but to those close to him and who knew him well, he had plenty to say and share. Throughout his many adventures, all who crossed paths with him will testify to the fact that he was generous to a fault. Thus, it is with great sadness that all who knew and loved him grieve his loss as a son, a brother, a husband, a father and a loyal friend much too early in life.

And in the years to come, when we grow old and weary
Let us take comfort in the fellowship we were privileged to share.
And in the distant recesses of our memories,
Lest we forget,
Our dear Suresh was once amongst us all.

Written By,
Friends of Suraeisan