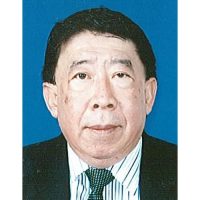 Mr Sng Kim Kuay (KK Sng) was born on 27 September 1942 and the eldest of five brothers and two sisters. He studied in English College Johor Bahru. In 1962, he joined the Royal Malaysian Customs Department as an Assistant Superintendent and was soon promoted to Superintendent.

In 1974, with the recommendation of His Royal Highness Sultan Azlan Shah (the Lord President at that time), he left for United Kingdom to pursue his law studies. He completed his law degree and Bar exams in 18 months which was an achievement no one else had done before. The reason he could do this was that at that time there was no need to complete the degree before enrolling for the Bar exams. That was a loop hole which was subsequently amended wherein one must finish one’s law degree before one could enroll for the Bar exams.

Upon his return to Malaysia in 1976, KK Sng chambered in Shook Lin & Bok and thereafter started the firm of Sng & Mathew in 1978. He was a well respected practitioner in Kuala Lumpur and liked by everyone. In 1996, he helped his two sons Sng Eu Kim and Sng Eu Sun set up the firm of Sng & Co.

KK Sng had led a full and lustrous life and is missed by family and friends. He passed away on 1 January 2010.