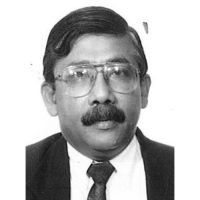 Shukanta Choudhury was born on 31 January 1951. He was admitted to the Honourable Society of the Middle Temple on 26 July 1983 and called to the “Degree of the Utter Bar” on 27 November 1984.

Shukantha was admitted as an Advocate & Solicitor of the High Court of Malaya on 4 January 1986 and spent most of his time with G Dorai & Co. as a legal assistant.

Shukanta embraced his work with candour and without fear. His determination to strive for excellency and perfection in his work was highly commendable.

It was therefore not surprising to discover that Shukanta’s friends could be counted from all walks of life and from all sides of the political, social and legal spectrum. He was fluent in many languages, which was an added advantage.

Amongst his friends, he was renowned for his witty remarks and charitable disposition. He was always willing to extend a helping hand to whosoever needed it and to this, ex-colleagues and friends are his living testimonies.

Although Shukanta was carrying an unforgiving workload in his practice, he still managed to appear for the Anand Centre of Fine Arts, Singapore and had been awarded the Certificate by the Pracheen Kala Kendra for his melodious recital on ‘Sitar’, his favorite instrument.

His enthusiasm for music led him to volunteer and teach music at the Malaysian Blind Students Association and the Pure Life Society.

He passed away on 21 September 2000, due to a heart attack. He leaves behind his beloved wife and two children. Although he is not around us, the memories of Shukanta stay on with us.

Time marches on but never stays,
but memory stays,
touring silently the rest of our days.