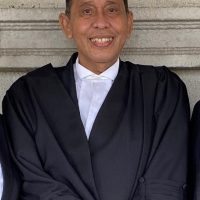 Shamsul Bahrin bin Baharuddin, 62, passed away on 26 July 2021. He was born in Gombak, Kuala Lumpur and received his education at Victoria’s Institution, Kuala Lumpur under Asrama Dr. Latif, Yayasan Selangor. He later went on to study at Institut Teknologi MARA (ITM) Shah Alam and obtained his Diploma in Law (D.I.L) in 1981 and later completed his Advanced Diploma in Law (A.D.I.L) in 1990 while working at Mayban Finance Berhad. In 2015, he later obtained his LL.M in Islamic Banking from International Islamic University Malaysia (IIUM).

Shamsul began his career with Mayban Finance Berhad as a Branch Manager in Medan Tuanku, before being appointed as Head Securities. His last appointment in Malayan Banking Berhad was Head of Legal and Head of Risk and Compliance. Shamsul was admitted as an Advocate and Solicitor of the High Court of Malaya before Datuk Wira Low Hop Bing in 1995.

He joined the law firm of C.L. Boo & Associates as a partner in 2007 and went on to join Azam, Baba & Aqmar as a partner in 2009. Throughout his career, he was actively teaching Banking Law and Islamic Banking to several Banks across Malaysia.

Shamsul married Puan Zuraidah binti Mohd Zam and was blessed with three children. Shamsul inspired two of his children to become lawyers. His son, Huzir, is now a Legal Associate in Azam, Baba & Aqmar. A few months before he passed away, he had the opportunity to attend the High Court and see his daughter, Suhaila, admitted as an Advocate and Solicitor of the High Court of Malaya which was moved by his best friend during law school, Dato’ Syed Azimal Amir. Shamsul motivated Suhaila to become a military officer throughout her legal studies and she is now serving in the Royal Malaysian Navy as a Legal Officer.

Shamsul was diagnosed with End-Stage Renal Failure in 2019 and passed away peacefully, surrounded by his wife and children at home due to the said disease two years later. Throughout his lifetime, he was a loving husband, a caring father, a humble man, and a helpful person.

On behalf of my husband, I would like to thank his friends in the legal fraternity who have supported him throughout his legal career and for being there for him when he was terminally ill. May his soul rest in perfect eternal peace. Al-Fatihah.