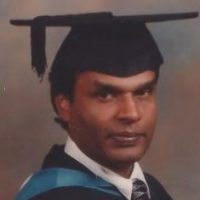 Satthiyasilan Shamugam was born on 10 April 1954 in Kuala Lumpur, Malaysia. He was very passionate in the field of language studies, theology, philosophy and education. Starting from humble beginnings as a school teacher, he then entered the government workforce as an Inspector within the Health Department.

With the motivation and support given by his wife, he took up law and registered himself for the University of London LL.B External Programme at the age of 37 and successfully attained his Bachelor of Laws (LL.B) Degree in the year 1995 at the age of 41. Satthiyasilan then received his Master of Laws (LL.M) from University of Malaya at the age of 51 and became an instant inspiration for those around him. He also tutored law students during his free time and never once took any sort of fees from them as he loved helping students progress in education.

Whoever knew him had often remarked that he was always seen with a pen and reading material wherever he went. He was a man whose passion was to gain knowledge rather than to become financially wealthy, and all that he earned he provided for the well-being of his family. He was always a very responsible, devoted, loving father and husband even though he was struggling to balance a family and also education.

Satthiyasilan always loved to lighten up the environment and was someone a person could have any kind of meaningful and informative conversation. As he neared the age of 60, he became very spiritual and an ardent devotee of Shirdi Sai Baba. This path made him into an exceptionally talented spiritual singer known by many devotees whom had endlessly sought guidance from him. Whatever knowledge he gained, he shared it with all. This was the essence of life he blessed his children with, to be giving without any expectation.

Towards the end of his life, Satthiyasilan and his wife, Vijayakumari sang together in many temples and journeyed together in a beautiful spiritual path. He would forever be remembered as the one with a soothing and beautiful voice. His first son Nirmell is also a teacher, following his father’s footstep and passion in education. The second, Nheellkamal had completed LL.B and aspiring to fulfill his father’s footstep as a lawyer, and his daughter Sapnaa is a Doctor at Ampang Hospital, Kuala Lumpur.

Satthiyasilan is an inspiration to many and dearly missed by his wife, children, brother, relatives and friends.