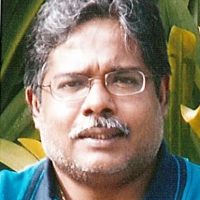 Mr Satish P.S. Nair (affectionately known as ‘Satish’ to family and friends) was called home to his rightful place to be with the Almighty in the early evening on 24 October 2010. His peaceful demise came as a sudden shock to his loved ones and friends, none of whom expected this jewel of a person to leave so suddenly and without saying goodbye.

His loved ones, family and close friends are still trying to come to terms accepting that he no longer remains amongst us as none of us ever imagined a life without Satish in it. They say time heals all wounds but the pain of his loss will always be felt by those he left behind.

Satish was born on 4 February 1961 in Petaling Jaya and is the third child of Mr P.S. Nair and Madam Gomathy Nair. He completed his primary education at the Vivekananda School, Brickfields, and later went on to La’Salle PJ where he completed his secondary education by sitting for the Malaysian Certificate of Education (M.C.E) in 1978.

Satish then enrolled himself at the Stamford College PJ where he sat for the ‘A’ level Examination in 1979 before proceeding to read Law in London, England, where he graduated from the University of London with an Honours Degree in Law (LL.B) in 1986. Satish was later admitted as a Barrister at the prestigious Lincolns Inn, London in 1988, after which he returned home to Malaysia and completed his chambering and was called to the Malaysian Bar on 22 September 1989.

Satish first set up a partnership under the name of Vincent and Satish, Kuala Lumpur but later preferred to be an Editor at the Malaysian Current Law Journal from 1993 to 1996. Satish then resumed his legal practice and joined the firm of S.N. Fong from 1997 to 2002, after which he set up his own firm under the name of Satish P.S. Nair, Kuala Lumpur until his untimely demise on 24 October 2010.

I had the pleasure of having personally known Satish since 1998, after which we became so close that I looked upon him as my elder brother, whom I regularly turned to for advice and guidance.

Satish left behind his beloved wife, Geeta Jothilingam of Matthew Thomas & Co. Kuala Lumpur and 3 lovely children, Laveen Nair, Taysher Nair and Kaeshini Nair. He met the love of his life, Geeta, in 1981 on a flight to London and there was no turning back on their romance which blossomed during their time together in London as students and which was later further strengthened when they tied the knot in January 1990.

During the time I knew Satish, I always found him to be a devoted and loving husband and a dedicated and responsible father. Satish had the gift of being able to interact well with adults and children alike.

Satish’s hobbies included reading, travelling, playing pool and collecting train sets. His strong command of the English Language and Shakespearean Literature and his witty nature were some of his admirable qualities, not to forget his romantic side where his poetic love letters combined with his persistence won over Geeta’s heart. Satish’s other notable quality was his frankness when asked about his opinion on issues ranging from current affairs to religion and politics.

As a friend, Satish always believed in quality over quantity. He chose his friends very carefully and those who had the privilege of being close to him will attest to the fact that Satish treated his friends like family and that they could always count on him in times of need. Satish’s demise has left a void in the life of his close friends, and one particular gentleman by the name of Ravindran, who was Satish’s best friend, is still trying to come to terms with his loss. Such is the impact that Satish has had on the lives of his friends. Those who knew Satish will always remember him as a very likeable, kind, generous hearted and honest person.

Satish was also a devoted son, a reliable brother and brother-in-law and a much adored uncle to his nephews and nieces.

As an Advocate and Solicitor, Satish was an active litigator and his integrity is beyond reproach. His sense of commitment and duty to the Court and clients was unquestionable. Satish was well liked and earned the respect from fellow members of the Bar.

The last time I met Satish was two weeks before his passing, and looking back, I wished I could have held on to that moment, for that was the last time I was ever going to see and talk to my best friend. I believe Satish led his life with no regrets. As much as I mourn his demise, I also celebrate the wonderful memories I had of him.

Satish has left us with a lifetime of memories to cherish and he will always live on in our hearts. May his soul rest in peace.

I would like to thank Ms. Geeta Jothilingam, for having given me this honour and privilege to pen down some words in memory of my beloved friend and brother.