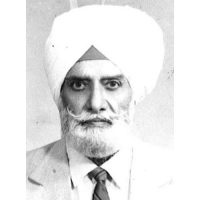 Sardar Atma Singh Gill was a member of the Honourable Society of Lincoln’s Inn and an Advocate and Solicitor of the High Court of Malaya. He practised law first in Shearn Delamore and Company, Seremban and then as a founder of the firm of Gill and Tang where he continued until his death at the age of 78 on 27 February 1995.

In his heyday, he towered above his fellow men in the energy, ebullience and sheer charisma which he radiated on everyone around him.

He was born on 17 December 1917 in Pajam, Negri Sembilan, where his father ran a small business as a haulier and a financier. At the tender age of five his mother passed away. When the successive deaths of his siblings left him their sole survivor, his father sent him to his home village Chugawan, in the Moga District, Punjab to be nurtured to health by his near relations. That done, he was brought back and put into the Kajang High School. He passed his Cambridge Senior School Certificate Examination here in 1936.

To honour the family commitments, he returned to the family village to marry Madam Bachint Kaur to whom he had been betrothed. They returned to Malaysia to work out their destiny armed with little more than their faith in their ancestral lineage and the courage of their religious and cultural convictions. For the Gill clan proudly traced their line direct to Guru Gobind Singh and Atma Singh never ceased to proclaim that he came from the tribe of Jat Sikhs who have always been renowned for the tenacity in the way they cared for their heritage and their penchant for the force of arms. Indeed his grand uncle Sgt Major Ram Singh had already been decorated for gallantry in the Pahang wars in the 1890’s with the George Cross and his sword remains a cherished heirloom in the family home to this day.

Left literally to lift himself from his bootstraps, Atma acquire a lorry and went into the haulage business himself. The arrival of the Japanese put paid to this activity and he had to bring up his young family in any way he could. He raised cattle, went into market gardening and community feeding projects and acquired some specialty in dispensing such medicines as he could salvage from the Estate Dressers in the vicinity. He even risked his life running a clandestine operation to transport rice from Thailand on Malaysian Railway goods trains and jettisoned for recovery near the Batu Cantonment and from thence humped by man-power passed the Japanese sentry posts to the distribution points in Sentul. When war ended, he purchased a fleet of second hand 3-ton military vehicles, which he adapted for the carriage of goods and so started as one of the leading hauliers in Negri Sembilan, specialising in the collection of scrap rubber for processing in the factory at Sagill in Malacca.

He also took on an active role in the running of the Foh Hup Omnibus Company, which was then carrying passengers from Seremban via Kajang to Kuala Lumpur.

His business activities did not stop him from assuaging his thirst for knowledge. Initially he went into an in-depth study of the Sikh Scriptures and was conferred with the authoritative status of Giani in 1952. His command of the congregation in the Sikh Temples in his Home State of Negri Sembilan followed as a matter of course.

All this experience, Atma Singh brought on board when at the age of 36 he joined Lincoln’s Inn to read Law. He did most of the Part 1 in Malaya and left for London in November 1954 after he had made proper provision for his family and for his further education.

He completed the Bar Finals in December 1955 and was called to the English Bar in Lincoln’s Inn in mid 1956 at the age of 39.

He returned to Seremban in July 1956 where he teamed up with Datuk Mahadev Shankar in 1957 to run Shearn Delamore and Company under the watchful eye of the late Mr R.H.V. Rintoul.

In early 1963, Atma Singh founded the firm now known as Gill and Tang in Seremban with a branch in Kuala Lumpur. His son Paramjit Singh Gill who had left a promising career as a planter to become a lawyer joined him in 1972.

Atma Singh’s law library was easily the best in the State and he specialised in licensing disputes in the Road Transport Department and in general litigation. He was one of the initiators and founder member of the Seremban International Golf Club. He held office there both as Captain and then as President, and was responsible for its development into a 18-hole course.

He was a scratch handicap golfer in his time. His feats of strength and endurance were legendary.

He was one of the pioneer founders of the Malayan Sikh Sports Festival, an Institution which meets annually in different State Capitals and Atma Singh Gill Trophy is awarded in golf to the best gross champion in good order and tradition and survives to this day.

In his heyday, his family was the cynosure of Seremban. His wife Bachint Kaur stood nearly as tall as him and a radiant beauty in her own right. The cuisine in their house was a six star affair and their hospitality was famous.

But it was not all honey and roses. They lost their only daughter on 10 July 1955 to a mortal illness when Atma was still in the U.K.

Worse was to come. Their eldest son Ranjit Singh had his life cruelly cut short by a freak rowing accident in the Swan River in which he was drowned on 5 August 1963. He had a brilliant career both in studies and sports in the King George V School in Seremban and thereafter in Wesley College in Perth, West Australia and thence into University of Western Australia for a promising career in Medicine. Had fate not so unkindly intervened, Ranjit Singh would undoubtedly have been one of Malaysia’s most eminent medical practitioners today.

That blow left the family paralysed with grief. But in the fullness of time they bounced back to take a full part in the life of the community.

The late Sardar Atma Singh Gill is survived by his widow Madam Bachint Kaur who takes a very active part in the social and rehabilitation work in the Sikh Community in Negri Sembilan. Harjit Singh, their second son has gone on to make his mark in Canada where he is in the meat processing line. Paramjit Singh Gill, their third son is a lawyer and a prominent businessman in his own right. Baljit Singh Gill, once the baby of the family, is now in the business of supplying goods and services to golf clubs around Canada.

In the early 1980’s a burst appendix with post-operative complications terminated Atma Singh’s golf career much to his chagrin as he had devoted almost all his leisure hours to participating in and promoting the game. His extramural activities were now confined to morning walks. He nevertheless continued with legal practice until early February 1995 when he suffered from a heart attack. Thereafter his health progressively deteriorated and he eventually passed away peacefully at the Institut Jantung Negara Kuala Lumpur on 27 February 1995.

In his prime, Sardar Atma Singh was a lawyer and citizen extra-ordinaire. With his depth of human experience he brought new insights into every problem he had to contend with. To be in his company was not just to be educated but also to be entertained. His earthy humour was pungent and above all his Jat peasant common sense often brought his flying academic counter-parts down to earth with a resounding thud. He was much sought after as a lay preacher for his spiritual discourses on the Guru Granth Sahib and he was a role model for everyone in the Community.

For us who were his kith and kin, his departure has left a void, which cannot be filled. In our lifetime and for our hereafter we shall always keep his memory fresh in our thoughts. On each anniversary of his death we shall formally ring out his praises at the requiem in the Sikh Temple in Seremban and Mantin.

From the date of his admission and enrolment as an Advocate and Solicitor of the High Court of Malaya, he was an ornament to the legal profession and a pillar of the Community in Seremban. Alas, no contemporaneous memorial was held for him because of a misguided judicial edict whereby references for deceased lawyers was ordered to be discontinued.

The resurrection of that time honoured tradition to consecrate the memory of those who helped shape the Bar is indeed timely.

We who lived with and loved Sardar Giani Atma Singh Gill are consoled and comforted, albeit belatedly, that his entrance into the Lawyer’s Hall of Fame will now be unimpeded.