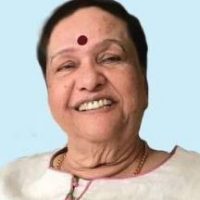 Santha Menon defied stereotypes. She was brilliant, ambitious and driven… deeply religious and traditionally attired… broad minded and generous to a fault.

There are two quotes from Joan of Arc that encapsulate Santha.

She was born to practise law, it was her calling. She was fearless and met all challenges with passion and determination. Many young lady lawyers today will tell how she was their role model, that she broke the glass ceiling in the 1960’s and 1970’s… in a sari. And she did all this without compromise. She was a devoted wife and mother to her husband and their two daughters. They were always her top priority. She believed in God and her faith very often moved mountains.

Santha was born in Singapore in 1937. She went to school at the Methodist Girls School, Kuala Lumpur and then met and fell in love with her husband, Y.B. Menon, when she was just 17. She married him straight out of school and started her working life as a kindergarten teacher. They had their first daughter when Santha was 21 years old. In a conversation with her brother, Tan Sri Dr. B.C. Sekhar, the first Malaysian Director General of the Rubber Research Institute of Malaysia, when he casually challenged her to finish her schooling and study law, she decided to make it her mission. With an infant and while working as a teacher, she studied for her Higher School Certificate and then the first year of law in Kuala Lumpur. In order to complete her Barrister-at-law, however, she needed to go to London to study and to attend the compulsory dinners at the Inns of Court for the next two years. She enrolled as a student of Inner Temple. Fortunately for her, her husband, Y.B. Menon, was incredibly supportive. Even though money was tight, and they had a three year old, he encouraged her to go to England. He wrote her letters every single day so that she would not be lonely.

She could not stand being away from her family, so in typical Santha fashion she went and met the law lords and got special exemption from the dinners at the Inner Temple and also permission to sit for the exams early. Amazingly, she passed and came home a whole year early as a Barrister. She was called to the Malayan Bar in 1965 and to the Singapore Bar in 1983.

Santha joined Shearn Delamore & Co in 1965 as a pupil of Mr Mahadev Shankar (later Court of Appeal Judge Dato’ Mahadev Shankar). Initially she was involved in litigation amongst others. In the famous case of Weng Lok Mining Company Limited vs Hiap Lee Brickmakers Limited [1974] 2MLJ 1, she won the case for her client in the High Court but lost in the Federal Court. Undaunted, and encouraged by the Trial Judge, she took up the cause of her client all the way to the Privy Council and succeeded, earning accolades not only from the Trial Judge but also the Lord Justices of the Privy Council before whom Santha personally argued the appeal.

Under the mentorship of Senior Partner Mr Chan Hua Eng, Santha became an outstanding conveyancing lawyer. She served many years on the Bar Council Conveyancing Committee.

Santha Menon aspired to be a Partner in Shearn Delamore. Initially, there was some resistance. They did not want “the swish of a sari in the corridors”! But in time, Mr Chan Hua Eng was able to persuade his partners that Santha will be an asset to the firm. Under his mentorship, Santha, in 1977, rose to become the first lady partner in Shearn Delamore.

Needless to say, all this would have been an outstanding achievement for any man. But for a sari-clad, married woman and mother, to be recruited by conservative male lawyers at one of the most elite firms in Malaysia in the 1960’s and accepted as a Partner in the 1970’s, that was nothing short of ground-breaking. Santha was the trail blazer for women in Malaysia’s legal fraternity.

Santha’s legacy did not end with her own personal achievements as a lawyer and as a leader in the Bar. Her most enduring gift to the Bar is the generation of young lawyers, especially women, she took under her wing. Many have gone on to become respected lawyers in their own right. Santha will be smiling benignly down on them right now from wherever she is and celebrating their achievements.