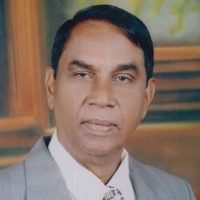 Mr SA Ponmugam’s life will provide inspiration for many who seek to succeed in life. Mr Ponmugam came from humble beginnings. He was immersed in poverty. Yet through his hard work and single minded will to succeed against all odds.

Ponmugam had his early education entirely in the Tamil Language with a very faint touch of the English Language and a fair command of Bahasa Malaysia. After completing his school education, he began working as a reporter for Tamil Nesan which was an independent daily at the time. After an exacting day, he spent time learning English into the late hours of the night. He successfully completed his sixth form as a mature student.

With the money he had saved he proceeded to London where he completed his Bar examinations and was called to the English Bar at Gray’s Inn. On his return to Malaysia, after completing his pupillage, Ponmugam commenced practice. He always championed the cause of the poor and the oppressed. At the same time his skills as an advocate did not go unnoticed by commercial houses. In one case he appeared against a bank and succeeded at the High Court. When the case came before the Supreme Court, Ponmugam asked me if I could appear with him. The client was penurious. We held onto the judgment that Ponmugam by his skill had won in the High Court. Ponmugam had agreed to do the case pro bono. After the bank had paid the judgment sum, the client met with Ponmugam and offered to pay a fee. The gentleman that Ponmugam was, he declined the offer. He had promised the client to do the case without a fee and he was not prepared to go back on that promise. As it happened, after the result in that case, the bank concerned approached Ponmugam and put him on its panel of lawyers. That engagement proved sufficiently lucrative for him.

Ponmugam was not one who yearned for wealth. He was content with the practice he had. A few years ago, he retired from practice almost completely. But he did appear in one or two cases just to keep in touch with the law. He also acquired a taste for agriculture, growing vegetables in the allotment adjacent to his home. His friends were never short of a fresh supply of the many varieties that he grew.

The greatest beneficiary of Ponmugam was the Tamil Language. For no one could have toiled for the proper teaching of it and for the spread of it even at higher levels of education. Such was his love for the language that whenever we met he used to, with the politeness with which he was associated, prompt me to respond to him in Tamil. He wrote a regular column on the law in a well-known Tamil daily. He was a keen educator of the mass of poor Tamil speaking people of their constitutional and other legal rights.

Ponmugam was my friend. Like so many of his other friends, I miss him. And I commend to those who curse their status of poverty in life to learn from his example – to rise from the depths to the zenith of success by sheer hard work and steeled determination.