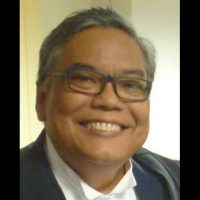 (To my beloved Papa)
Whenever we mention “Rosli Abu Zarim”, the first thing that pops in the mind of those who know him is his laughter. His jokes could light up the day, his laughter was most of the time contagious, and would make everyone around him happy. There was no negativity or despair in his life dictionary, even in the face of adversity. He would turn any difficulties or problems into positive challenges.

Allahyarham Rosli Abu Zarim was born on 9 March 1960, in Seri Menanti, Kuala Pilah, Negeri Sembilan. He was the third of seven siblings. Allahyarham was married to Noorasikin A Bakar (my biological mother), who is also a fellow member of the Bar, in 1987. Unfortunately the marriage only lasted for 10 years. Uniquely, they were closer since then (as best friends, of course) and would regard each other as “special advisor”. In 1998, Allahyarham married Wan Nefertiti Mohd Rusli (my Mummy) and blessed with three beautiful children; Wan Elena, Puteri and Rosh Khalis.

He was a great athlete during his high school and university life. Many people would not believe this fact, due to his ‘physical enlargement’ which he called it as “extra-muscles” that developed after being a lawyer. According to him, lawyers will naturally build these “extra-muscles” from their experience, knowledge, wisdom, and sometimes by losing in a Court case.

During his university years, he was a popular rugby and hockey player, debater and Pemantun. From the facts gathered from his buddies, he was never a bookworm. You would never find him in the library or see him being serious in class, yet he never failed in any of the exams. He always believed in “study smart” rather than “study hard”.

After reading in Chambers at Messrs Tahir & Salleh, Allahyarham joined Mohd Akhir & Partners. Rosli Abu Zarim & Co was later established in 1998. In his legal career, his forte was criminal, banking, and general litigation, corporate works and arbitration. He also contributed to the legal academia as a part time lecturer at UKM Law Matriculation Centre during its formation stage as well as at the Faculty of Law, Universiti Kebangsaan Malaysia in early 2000. His wonderful sense of humor and his amazing ability to make complex issues simple made the students loved his class so much. His lectures were never boring.

He loved to share his experience and knowledge enthusiastically, especially with the young lawyers. I still remember, in his speech as my mover when I was called to the Bar in 2012, he gave us, the young lawyers, a valuable piece of advice – always be humble and inquisitive:

Allahyarham was a great son, a supportive husband, a wonderful father, a caring brother, a loveable uncle as well as a thoughtful friend. He spent his whole life helping people. He was very generous and would certainly help in the best manner that he could, without expecting anything in return. Surely he will be dearly missed, but his memories and spirit will always be in our hearts.

May Allah bless his soul and grant him Jannah. Amin.