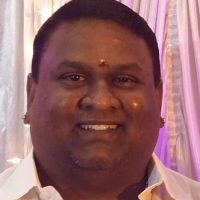 Ravi Muniandy was born on 16 June 1972 in Nibong Tebal, Penang. He received his early education at Sekolah Kebangsaan Kuala Perai, Butterworth and subsequently at SMK Bukit Mertajam, Seberang Perai, Penang. His academic brilliance stood out at a young age which earned him the respect and admiration of his teachers and peers. He was made Head Prefect of his school by Form 5. His scholastic excellence enabled him to gain a coveted place to study law at the Law Faculty of University Malaya in 1992.

It was in UM that Ravi learned to love the law. He was the model student, not just to his lecturers but to fellow students. He represented UM in debating. Ask any of his law school contemporaries and they will tell you how learned Ravi was and, in equal measure, how generous Ravi was in sharing his knowledge. Many UM law school juniors regarded Ravi as a mentor, although he himself would probably have shrugged off any notion of him being placed on a pedestal and say what he did was just “ordinary”.

Upon completing his law degree, Ravi was offered a position as a Magistrate. He chose to practise law and join the Bar instead.

It soon became apparent that Ravi truly belonged at the Bar. He excelled at advocacy. He backed that up with a deep understanding of the Court Rules and law. His good natured and easy going demeanour belied a skilled strategist and orator who could be fiercely determined and competitive. His sharp mind meant he was always quick on his feet. An intellect, he could discuss the most complex law and philosophical question. Yet, his sense of humour meant that he could easily laugh at how absurd some of those subjects were.

His courteousness, civility and calmness shone through in Court. In one heated Court battle, Ravi faced a tirade of insults from an abusive witness who took the matter far too personally. Ravi kept his composure, all the time remaining extraordinarily polite and respectful to the witness. He carried out his duties in true gentlemanly fashion.

Ravi remained ever ready to share his knowledge with his colleagues at the Bar who sought his help. Conversely, he always genuinely thanked those who assisted him.

This was what marked Ravi as special. He truly was a good, generous and humble man.

He was thoughtful, caring and ever willing to help others in need. He gave what he could to the disadvantaged in society, whether they were underprivileged children, poor families, the handicapped or poor foreign workers. He even extended his charity work to India.

Ravi was deeply religious and he shied away from the limelight. He was a private person who was a devoted husband, father and son to his beloved wife Prema, son Harrish and mother. He loved nothing more than to arrange family gatherings or outings and spend time with his family.

Ravi passed away unexpectedly on 27 October 2015. The news came as a shock to those in the legal fraternity who knew him. The Malaysian Bar has lost a learned, skilled and spirited member. His family have lost a wonderful and gentle husband, father, son and brother.

Ravi, we are indeed blessed to have known you – a friend who was by no means “ordinary” in your abundance of life, love and humanity.

A great man gone too soon. Ravi was, and shall remain, an inspiration.