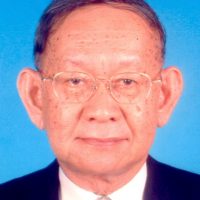 Raja Aziz Addruse was born in Chemor, Perak on 10 February 1936. He went to Anderson School in Ipoh for his secondary school education. He won a scholarship to read law at University of Bristol and in 1954 set sail for England to further his studies. After completing his university studies at Bristol, he was called to the English Bar by the Honourable Society of Lincoln’s Inn in 1960. He then returned to Malaysia to join the Judicial and Legal Service as a deputy public prosecutor and later served as deputy parliamentary draftsman under Malaya’s first Parliamentary Draftsman, Reginald Hugh Hickling. Raja Aziz always remembered his days as a parliamentary draftsman with fondness, noting that it had instilled in him a discipline and rigour in the use of language.

In 1966, Raja Aziz was called to the Malaysian Bar and shortly afterwards entered private practice and set up the firm, Rithauddeen & Aziz, with his close friend and colleague, Tengku Ahmad Rithauddeen.

Raja Aziz was absolute in his commitment to the independence of the judiciary and the role the Bar and the members of the legal profession had to play in maintaining that independence. He served as a member of the Bar Council of Malaysia for 21 years. He was first elected President of the Malaysian Bar and served in this office from 1976 to 1978. He served as President of the Malaysian Bar for a further two terms (by popular request) from 1988 to 1989 and 1992 to 1993.

Raja Aziz or ’Ungku’ as he was affectionately known in legal circles was, during his lifetime of practice, a passionate advocate for justice, the rule of law and human rights. He did not hesitate to speak out when he thought it was necessary on the many issues he felt were wrong or contrary to the principles of justice and fairness. Notable cases he undertook included representing the former Lord President Tun Salleh Abas when he was suspended and later dismissed from office in the 1988 constitutional crisis. Raja Aziz was also the lead defence counsel in the Anwar Ibrahim corruption and the first sodomy trial. He acted as counsel for Chin Peng, the former leader of the Communist Party of Malaya in his attempt to return to Malaysia. One of his last notable cases was the challenge by Sultan Ismail Putra against his removal as the sovereign of the State of Kelantan.

Raja Aziz was one of the founding members of the National Human Rights Society ‘HAKAM’ and served as HAKAM’s President from 1992 to 1997 and then again from 2000 to 2001. In May 2006, he was elected as a Commissioner of the International Commission of Jurists, headquartered in Geneva. In April 2010, he was honoured with the Lifetime Professional Integrity Award by the Malaysian Professional Centre.

Raja Aziz passed away on 12 July 2011 with his family and close friends by his side. He leaves behind his wife Catherine, his daughters Raja Azrine and Raja Adeline, his sons-in-law Jonathan Rogers and Craig Coggle and his grandson, Cassidy Coggle.

In the words of his close friend L.C. Vohrah,

Aziz was ‘as true as they come’ and I would describe him as ‘ethics personified.