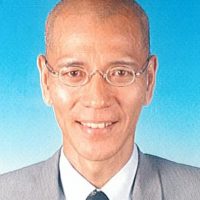 Ngae Koh Hieng or Edwin Ngae as he was popularly known was born in Engkilo, Sibu Sarawak along the Rejang River on 8 January 1954. He had his primary education in Engkilo and would always reminisce about having gone to school barefooted. He then studied at the Methodist High School in Sibu and obtained the Sarawak Junior School Certificate with Distinction. He completed his Higher School Certificate in 1973. It was at the University of Malaya when I first met Edwin in 1974 when we both were pursuing a degree in Economics (Business Administration) at the Faculty of Economics and Administration. Edwin was a symbol of youth and vitality and had lots of passion for life and was always hungry for knowledge. After graduating with a Bachelor degree in Economics, Edwin started work with a developer. But soon after, his quest for further knowledge motivated him to read law as an external student of the University of London on a part-time basis, juggling time with his family and work. He completed his LL.B degree with Honours in 1989 and Certificate of Legal Practice in the year 1990. Soon after, he quit the commercial sector and commenced full time legal practice.

Edwin was steadfast in his beliefs of right and wrong and he practised with zest and passion. Legal practice however was not his only passion in life. Edwin always a keen sportsman, soon discovered his love for running and began pursuing this hobby on a serious note. He took part in many marathons, triathlons, iron-man events and his biggest achievement was his participation in the Sahara desert run in the year 2007 which he successfully completed. I was informed that he was only one of the 3 men from Malaysia who completed this humanly difficult feat. His self-belief and determination knew no bounds and should be an example for the young ones to emulate.

Illness struck Edwin in 2008 and after a short struggle Edwin passed away on15 May 2010 leaving behind his beloved wife Koh Pin Pin who is also a member of the Bar and three lovely children Min Yin, Min Sheng and Min Xian. Edwin will always be remembered by those who missed him.