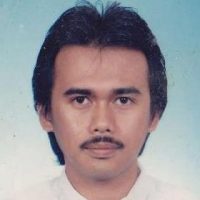 After his secondary school, Allahyarham read law and graduated with LL.B (Hons) from UITM in 1990. Allahyarham was called to the Bar in 1992.

Allahyarham was married to Razinah Mohd Zalman, a fellow member of the Bar, and they are blessed with seven lovely children, six boys and the youngest being a “princess” (in the words of Allahyarham). All the children are still school going.

For those of us who have known Allahyarham, we would remember him as a man with not many words but with a lot of warmth and wisdom; and never a person not to extend a helping hand when his assistance is needed or to extend his ears to listen to anyone’s problems, however minor they may be. Allahyarham had always looked at things positively.

In the words of his wife, Razinah, she has lost a “friend for fighting” who will always allow her to win the “fights” eventually.

For me personally, I can never forget the smart ‘pony tail’ that Allahyarham always had hidden under the collars of his shirt whenever he appeared in the corridors of the Courts.

True to the character and principles of Allahyarham, Razinah has requested me to seek forgiveness for Allahyarham from those who had known him, if in the slightest event Allahyarham had caused any hurt or done any wrong to anyone.