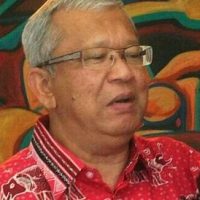 In the name of Allah, the Most Gracious and the Most Merciful, I would like to start this recitation by saying thank you to the Bar Council for being of service to my late father and his 23 year old firm. My father was the greatest love I have ever had. I have yet to meet a man who was such a sincere Muslim to His Maker.

My father declined his edict to become a Judge a couple of years back. I was very proud of my father. Since he passed on, I would like to mention that the reason for this occurrence is that he was simply adhering to his more important calling which is a calling to be with the Highest of All Ranks, ‘Al-Hakam’ which is Allah.

As his daughter, I would like to share that my father left me the most life changing items upon his death. He left me a solat book as well as a full Quranic journal which changed my life. After his passing, my father visits me daily from Heaven and we still manage to share jokes together up to this day. He was the greatest man I ever knew, peaceful and calm, with no desires or ties with worldly attributes. He had a friendly mannerism that one could not forget. He also was very dedicated in assisting the needy as well as bringing me, his daughter, up in his stature and has brought me into this beautiful life of godliness and I am humbled to be his only daughter.

Again, thank you very much for honouring my late father. I would like for us all to recite the al-fatihah for my father who is ever so kind to listen to us from Heaven. I really appreciate those who participated in this ceremony, and may Allah bless you good kind people and your families with God’s Light. Amin.