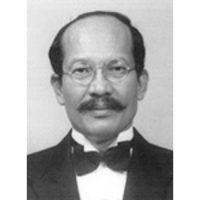 The late Mohamad Halim bin Ismail was born in Mersing, Johor on 5 June 1938. Orphaned at a very young age, he lived with his sister in Johor Bahru in his younger years. Mohamad Halim continued to live in Johor Bahru during his schooling years. He obtained his primary education at Ngee Heng Primary School and subsequently the English College for his secondary years.

Mohamad Halim started his career in the teaching line, as a temporary teacher at the English College. After a short tenure, he obtained employment with the Government’s Co-operative Department as a Co-operative Officer, first in Johor Bahru, and later in Taiping. While in service at the Co-operative Department, He received the ‘Hadiah Biasiswa Perundangan Persekutuan’, a scholarship to study for the bar legal course in England. As a result, he went to pursue his studies at the Honorable Society of the Inner Temple, London, in January 1968. Having spent three years in England, he returned to Malaysia in 1971.

On his return, he started his legal career at the Attorney General’s Chambers for a short period before becoming a legal advisor for the Ministry of Health. He went on to become a Deputy Public Prosecutor in Alor Setar and Kedah and then a Magistrate in Johor Bahru and Yang Dipertua Mahkamah Sesyen in Kuala Lumpur.

Mohamad Halim was a person who was constantly a knowledge seeker. Being very knowledgeable in many fields, especially history, he was always a source of knowledge for family members and friends. Having a jovial and reassuring character, he was certainly a loving husband and father, and a good company at all times.