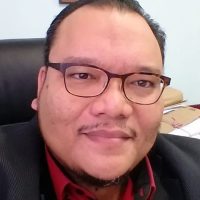 Mahadi Bin Muhammad is the founder of the Mahadi Redzuan & Co (the firm) since 2001. He is a former student of the MARA Junior Science College Taiping (Maktab Rendah Sains MARA Taiping). After successfully completed his Sijil Pelajaran Malaysia from the college, he was then offered by MARA to do law under the MARA’s scholarship. He went to the University of Leeds, England and graduated with an honours law degree from the university in July, 1997. While studying at Leeds, he was elected by the Malaysian student’s community as the President of the Malaysian Students Society for the University of Leeds and had actively engaged in various social and cultural activities organised by the society. Upon his returned to Malaysia, he had completed and passed the Certificate in Legal Practice examination in August, 1998 and had obtained a Professional Diploma in International Arbitration with the Malaysian Institute of Arbitrators (MIArb) in 2019.

Mahadi did his pupillage in Asbir Hira Singh & Co. and he was very well exposed to all litigation and conveyancing matters with the firm. He had acquired the necessary legal skills and knowledge at his early involvement in the legal fraternity while still a chambering student.

After completed his pupillage and admitted as an Advocate and Solicitor of the High Court of Malaya on 17 January 2000, Mahadi then joined Baharuddin Ali & Co. At his early stage of employment with the firm, Mahadi was asked to handle all litigation matters with the firm. He was having a portfolio as a general litigation lawyer handling variety of cases such as debt collection, goods sold and delivered, accident matters, constructions industry, negligence, various forms of execution of judgments, bankruptcy, banking, contractual disputes and regularly appeared in the lower and higher courts for contested and non-contested matters representing the firm.

Mahadi had been in practice for 20 years. He had also acquired the necessary skills and experience in handling various industrial relation matters. He had appeared regularly in the Industrial Court, High Court and Court of Appeal handling various cases pertaining to industrial disputes. It varies from misconducts, constructive dismissal, collective agreements, trade disputes, non-compliance, labour court/disputes, retrenchment, probationers, poor performance, termination benefits and etc. He had a very sound knowledge and/or experience in industrial law and was highly experience in matters pertaining to the insight of legal works and had been invited as one of the guest speakers at an Industrial Relations Convention speaking on issues of criminal misconducts.

Today, it is hard to believe, Mahadi my beloved husband is no longer here. Words cannot describe how this makes me, our children, all family and friends feel…. You’ve passed on to the other side, though I wish you could still be here with us. You were a remarkable man, dependable, loving and caring, generous and kind hearted…. You were the center of our world… You were one in million to me and our children. You made us laugh, you made us smile, you were my companion and dear friend…. You were a wonderful husband from beginning to end. Forever will you live on, in our heart and mind. Forever will you live in our thoughts and never die. With love always, I remember you. With fond memories, I think of you… I’m grateful for the times we had together. I will cherish my memories of you forever.

“Ya Allah, you are our Protector, so forgive my husband and us and have mercy upon him and us, you are the best of forgivers. And ordain for him and us good in this world and in Hereafter. Truly to Allah we belong and truly to Him we shall return”.