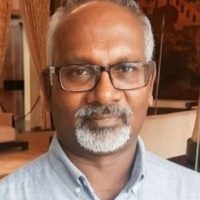 “Please give me courage and grace as I struggle in grief and sadness trying to articulate what a wonderful man my dad was”.

Born to a family of nine (9), M Stanislaus Vethanayagam to his family and friends as Stan. He had an immense love for sports, especially badminton and in later years golf (did a hole-in-one). Being at the center of every debate or arguing for his rights and those of others at a very young age much to the chagrin of his father who was unable to cope with the questions and arguments raised by Stan. This was the start of his interest in upholding rights and justice which then turned into his career in law, wherein he began his studies upon deriving the support and love of his wife after marriage.

M Stanislaus Vethanayagam held a Bachelor of Laws (Hons), England, and was a member of Middle Temple Inn. He was admitted as an Advocate & Solicitor of the High Court of Malaya in 1996 and was the sole proprietor of M. S. Vethanayagam & Associates.

In the year 2009, his daughter Natasha Marie Stanislaus decided to pursue law and then assisted Stan in the management and administration of his office to date. It was and still is a tremendous loss to his staff, family, and friends from the moment the horrific call was received that our dear Stan had passed on at 2.56 am, 15 June 2021. He was found to be Covid-19 positive and admitted to Serdang Hospital on 17 May 2021 and succumbed almost a month later.

It was a shock and a very painful grieving period for the staff, family, and friends. Yet, survival was necessary as many challenges and hurdles were faced in trying to hold on to the office that he struggled to build over 20 years.

In his lifetime, Stan was always known for his extreme sense of humour and the ability to light up the entire place with his loud voice, jokes, and personality among his friends and family. Whilst having this personality amongst friends and family, his nature in a courtroom was the complete opposite whereby opponents, fellow lawyers, clients, and colleagues described him as feral, aggressive and unrelenting. There were times that in the morning rush, he had encountered criminal cases where he forgot his file or was asked to attend to a matter on an ad hoc basis, even in those circumstances, he never backed away from such a challenge and successfully defended his client including obtaining bail, lesser sentences, and even acquittals.

Losing Stan on 15 June 2021 has never been easy nor has the pain any lesser, simply impossible to express. His absence and loss is greatly felt by his son Mathews, daughter Natasha, wife Rosemary, best friend Venugopal, pet dog Rocky, family, and friends.