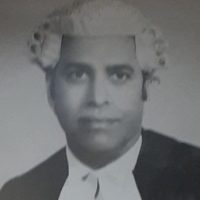 Malaysian Bar Council in one of its newsletter had mentioned that Krishnan Gopalan (KG) was “the top 2% of the most senior members of the Malaysian Bar”. This citation is a pinnacle of KG’s attributes and contribution to the legal profession where he had practised for more than 40 years.

KG was born on 7 December 1938 in Kuala Lumpur. He was the fifth child in a family of six. His parents were from the Indian State of Kerala and migrated to Malaya in the early 1900s. KG’s residence was located in Ampang Race Course which is the current site of KLCC. It is pertinent to mention that due to family’s financial situation, KG was required to work as a “jaga kereta boy” during race course days to supplement family income.

KG had his early education at the Mahatma Gandhi School which was located near the current St John’s Institution. He was a diligent student and although from an impoverished family, he continued to excel in his tertiary education.

Upon completion of his education, KG was employed in the Ministry of Health which was a “big thing” in those days. Not being contented with his current status then, he pursued his desire of reading law. He got himself transferred to Johor Bahru and pursued his law studies in the National University of Singapore (NUS), a prestigious education centre even to this day, and graduated.

It must be mentioned that KG was the first graduate among his family members and it was a proud moment for all. He did his chambering in Shearn Delamore and was called to the Malaysian Bar on 26 October 1975. KG was diligent in his work where his knowledge and expertise had assisted many in overcoming their respective legal issues. In extreme and needy cases, he would waive legal fees and go beyond the realm to be of assistance. He was extremely competent and dedicated in the pursuit of justice.

KG drew his last breath on 14 November 2019 surrounded by family members and friends. He was accorded a grand Hindu ceremonial send-off. Although departed, he will never be forgotten and always remain in the minds of his loved ones.

May his soul rest in peace and be placed among the blessed.

Written By,
Jefridin and Family