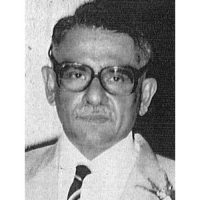 Karam Singh Veriah, who passed away on 22 January 1994 in New Delhi at the age of 58, was not in the league of the great men he admired; but his life was shaped by them and the great events of his time.

In the 1940s the world was at war – the great colonial empires were fighting each other, the colonies were rebelling and there were people’s revolutions everywhere. Sukarno in Indonesia, Tito in Yugoslavia, Gandhi, Nehru and Chandra Bose in India, Mao in China and Ho Chih Minh in Vietnam. Karam himself was not a great achiever nor a national liberator. He left no indelible mark on history or the lives of many men. But in his indomitable spirit to fight for justice and the rights of the poor, he was met with the great fighters of any time. In politics he was a socialist; in daily life he stood for the little man. For Karam, there was little difference between the two except in the degree of commitment.

He was always afraid he would “go soft” like some of his colleagues in Parti Rakyat, of which he was once vice-president. In an unpublished interview with Hamid Tuah’s daughter Siti Noor, recorded in December 1992, Karam said that “going soft in the head” was one of his great fears.

“I analyse myself constantly to avoid falling into a mellowness, to keep my fighting spirit intact,” he told Siti Noor. Karam was unhappy that leaders once described as great fighters had mellowed with age, accommodated, and compromised.

Karam Singh Veriah was a lawyer, an MP (Damansara) and an assemblyman (Serdang) from 1959 to 1964, an ISA detainee and in his own words “ex-advisor to various trade unions.”

Karam, the eldest in a family of five boys and four girls was born on 26 October 1936, in Seremban. His father, Kaher Singh Veriah, was a clerk, who later studied law and joined the MIC to become an assemblyman in Negri Sembilan, died in a car accident in 1964. His mother, Kartar Kaur, remembers Karam as a brilliant student in school, very idealistic and arguing even in childhood. “He always stood his ground in a dispute,” Kartar said. They all called Karam, Baiji (elder brother),

Karam studied at King George school in Seremban. He did his Senior Cambridge at 15 and completed his law at 19 (Gray’s Inn, London). But the rules barred him from practising until he was 21. At 22 he became an MP on a Socialist Front ticket. “I studied Marx and Lenin in England and read law part time,” he joked with Siti Noor saying he picked up the “lores of the left” in the many student circles in London. On his return, Karam made a beeline for the Malayan left politics of the 1950s. He managed to secure an introduction to Parti Rakyat president Ahmad Boestamam and struck up a lasting relationship that saw him contesting as a Socialist Front candidate for Parliament and the Selangor state assembly. Kartar remembers Karam renting a room in Kuala Lumpur and running “from one political meeting to another.”

His stint in Parliament was stormy. The early 60s was a stormy political period for Malaysia. Without real national consensus, there were detentions and demonstrations. Politics was fought on the streets and men like Karam excelled. He made a reputation for himself and found a place in the radical politics of the time.

In 1960 Karam married. He had a boy and two girls. He married again later and had another girl.

As an MP, Karam also visited India with parliamentary delegations and met Nehru, for whom he had no particular liking. Karam’s father had taken him to the town field in Seremban in 1943, where from his father’s shoulder, he had seen and heard Subhas Chandra Bose speak. “I was mesmerised … Nehru was also there but I knew they were different,” Karam later recollected. Nehru was also a fighter but he fought from a prison. “Bose was on the battlefront, talking to Hitler and General Tojo (Japanese wartime Prime Minister), building an army and fighting to free India,” he said. Bose’s uncompromising attitude and eventual death on the battlefield struck a cord in Karam’s temperament. In his later years as a lawyer and an MP, Karam journeyed to Yasukuni, Japan, to pray at the graves of Japanese generals, thanking them for helping Bose.

Karam was also mesmerised by India. “He saw himself as a leader of the Indian masses,” said Kartar. Karam travelled to India often and every time he would write back to say he will buy new clothes for his mother and family. “Always he came back empty-handed. He gave it to the Indian masses on the streets of Delhi,” Kartar said. On one trip in the mid-1970s, Karam ran into some friends who had formed a Delhi Police Association. They were fighting to get it recognised as a trade union. “Karam gave his legal expertise and won several cases in the Delhi Court. From the Court the matter landed on the streets,” his son Keshminder said. Indira Gandhi (Indian Prime Minister) put Karam on a first-class ticket back to Malaysia. Karam joked with his mother that it was the first time he had travelled first class. (V.P. Singh lifted the ban in 1992 allowing Karam to visit India which Karam did immediately).

In 1966, Karam Singh was detained under the ISA after he and others led a march of estate workers from Bukit Asahan in Malacca to Kuala Lumpur. The workers, who had rejected the NUPW, wanted to form their own union. Karam was released four years and a month later.

In 1973, Karam’s wife, Harbans Kaur died. “He would cook for us, take us to political meetings and the Court. I grew up with Karam moving about from one rented premises to another,” recollected Karam’s daughter Harinder, also a lawyer. Harinder’s earliest recollection of Karam was when she and her mother visited him at the Batu Gajah detention center in 1966. “I was about four then,” she said, adding she also remembers the train journey. Karam always told Harinder to stand up to anything and anyone, including him. “He wanted his children to stand up for their rights. He was loving and cuddled me a lot when I was a child,” she said.

Another daughter, Jasvinder is also a lawyer, while Keshminder is a real estate agent.

In the last decade of his life, Karam took on judges and lawyers. Twice he was held in contempt of Court. In the first case, he paid a RM10,000 fine and in the second he was jailed for three months. Karam fought the then Chief Justice Tan Sri Hamid Omar and the Bar Council, which he accused of not taking a clear stand, attacking particularly its vice-president Param Cumaraswamy. In the end the Bar came out strongly backing Karam. Karam was committed for contempt and fined RM10,000 on 17 October 1985. Three months later in another dispute, Karam asked the Court to commit Karpal Singh for contempt. It was at this time that the legal fraternity was put on the defence. “Karam has gone out of control,” one lawyer said. Karpal Singh at that time told the Court: “Karam Singh must be stopped … he appears to be suing everybody.” After a while, things quietened down.

His final and last clash with the Court came in 1992 when he sought to commit three Supreme Court judges. Here again he was embroiled with the right of his client to sue Socso. He was cited for contempt and was sentenced to three months. He was released after two months, on remission. But the Bar kept him on its rolls.

Param Cumaraswamy, who was at Karam’s funeral, said Karam was a great fighter of the poor and voiceless, and the Malaysian Bar is proud to have had him among its members.

Soon after leaving prison for the last time, Karam packed up his things, closed his legal office and gave away his books and papers. He then visited most of his old surviving Parti Rakyat members.

He met Siti Noor in December 1992 and they tried to record his life story. He then left for India, returned, and went back again. “India’s teeming masses, its poverty and its radical politics always attracted him,” his Parti Rakyat colleague Ishak Surin said, adding Karam saw himself as a liberator of the Indian masses.

He would want to be remembered as a man who fought injustice and never got soft in the head to the last.

This article is reproduced with permission from The Star, Malaysia. This article headlined “A fighter who battled to the last” by K. Baradan was published in The Star on 30 January 1994.