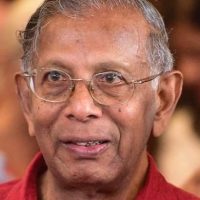 Siva had completed his Cambridge School Certificate examination and obtained 5 distinctions and his first choice for his tertiary education was medicine. Unfortunately, his dream of becoming a doctor failed to materialise as his father could not afford to send him to pursue medicine as he was already supporting Siva’s elder brother’s medical course at the University of Singapore.

Left with no choice, Siva was sent to train as a teacher in Brinsford Lodge, England. As a teacher, he was posted to the Penang Free School where he taught Mathematics and Additional Mathematics. He was then transferred to the Sultan Ismail Secondary School in Kota Bahru where he continued teaching Mathematics and Additional Mathematics. Both in Penang Free School and Methodist Boys School Penang he would give the weaker students extra classes and attention. This dedication to his students was later appreciated by some of his former students in an article they published in which Siva and some other teachers were given acknowledgment by their former students.

There was, however, a burning desire on Siva’s part to further his knowledge and change professions which is when he arrived in London towards the end of September 1969 to study law.

After his call at Lincolns’ Inn, Siva returned to Malaysia and became a lecturer at MARA teaching law. After working as a lecturer at MARA for approximately 3 years. Siva was admitted as an Advocate and Solicitor of the High Court of Malaya. He chambered at RR Chelliah and then became a Legal assistant at Nahappan, Muthu, and Peri and then at Aziz & Mazlan. Later, Siva went on to work at Michael, Chen & Lee before taking over the law practice of Nath & Co. and thereafter ventured solo under the name of Siva Segara & Co.

As a lawyer, he was very thorough in his research and he knew the provisions of the National Land Code well. One night at 11.00pm, Siva was asked if he had a particular statute at home. He said he did not. Half an hour later he went to his office and obtained the statute and provided the provision required. This is the extent Siva will go to assist you if you are in need. When the courts switched to using Bahasa Malaysia as the medium of proceedings, old timers like Siva found the change difficult. But this did not stop the student in him and he set on a path of learning Bahasa Malaysia in absolute detail. He would buy the Utusan Melayu and use a Malay-English dictionary to look up words he did not know. This habit went on for years, which he rubbed off on his daughter and together they mastered the language inside out. Siva stunned many Judges and colleagues when he came before the courts and spoke the National Language so eloquently.

His passion for teaching and research never ceased and he went on to teach Mathematics and Additional Mathematics to students sitting for their Form 5 examinations or any student weak in those subjects. He also spent his time with the underprivileged students of the Pure Life Society in Puchong, KL where he volunteered his services teaching the students Mathematics and English. He would spend hours on the phone assisting students paying no heed to the costs that he incurred while explaining the problems faced by the students with these two subjects. His dedication to his students even extended to the social activities of the children such as swimming. Siva himself learned how to swim from a book!

There was never a time Siva said no to anyone. He spent countless hours giving free legal advice and counseling, especially to children and families in trouble or those who could not afford legal counsel. As he always felt uncomfortable having too much money in hand he would go the extra mile to assist anyone in need of food or a family who needed to pay their bills.

There was not a pretentious bone in his body. Friends would say, Siva is what you get. Siva Segara, was self-made, self-reliant and his hard-working hands moulded what his daughter would say “a certain privileged and comfortable life for me”.

After much persuasion from his daughter, Siva reluctantly retired from legal practice at the age of 81, to relax and enjoy his twilight years. Little did the family know, that a random health screening would show a very progressive cancer of the prostate that would end his life within 5 months of its discovery. The beautiful part of this is that almost all his family and friends dear to him got to bid him farewell before he passed on.

He was an extraordinary man, decent and humble, a man whose generosity knew no bounds, whose devotion to his family was unconditional. He leaves behind his wife of 48 years, R. Rajakumari , his only daughter Shobana Segara (Shobie), son-in-law Nitesh Malani and two lovely grandchildren Dheeiya and Rohen, whom he doted till the end.

O Captain, My captain! We will miss and cherish all your teachings!

Siva Segara or Siva as he was affectionally known completed his secondary education at the well established Anglo Chinese School Penang.

He emerged with a string of distinctions and was at that time amongst the top students in his class.

He always wanted to be a medical doctor.

However, family financial constraints prevented him from pursuing his childhood ambition of doing medicine as his government servant father was already supporting his elder brother who was pursuing a medical programme at the then King Edward The VII College of Medicine in Singapore.

As an alternative, he set his mind on becoming a schoolmaster and went to Brinsford Lodge in England to train to be one.

Mathematics being his passion he returned to Malaysia after his stint in the UK and taught mathematics in many schools including Penang Free School and Sultan Ismail Secondary School in Kota Bahru.

Whilst a teacher he was conscious of numerous injustices being perpetrated in society by the strong against the weak and he had an inner desire to take up the causes of the weak. Soon law appeared to be amongst the options in his mind to meet and satisfy the ends of the downtrodden.

With the burning desire to be an advocate of the voiceless Siva then pursued his next ambition to train as a lawyer and enlisted at that prestigious hall of scholarship called Lincoln’s Inn in the United Kingdom and passed his exams in the shortest possible time.

Upon being called to the English Bar he returned to Malaysia and taught law students at MARA Institute for a period of time.

After having worked with many well-known and established lawyers Siva set up his own practice satisfying his ambitions of championing just causes and being a voice for the voiceless both of which he discharged admirably during his days.

In the practice of law, he certainly was service orientated and took up many a cause for which a fee was not sought. He was never a servant of the mighty.

He always took the view that many think “that might is right”.

In his view, might is always right until right puts might right. Such was his passion in his fight for the underdog.

No one who sought his wise counsel was turned away by applying the “means test”. Means was never his consideration but service to a cause was.

Whilst in the practice of law many an after-office hour was spent tutoring underprivileged and orphaned children, in English and Mathematics both of which were his passionate subjects.

Institutions like the Puchong Pure Life Society which housed 2,000 children or thereabouts were amongst the many establishments that benefitted from his energy, enterprise, and enthusiasm.

Siva was an extraordinary human being who was always helpful to his fellow men. Not only was he helpful he was also mindful of their needs. The hallmark of his life was humility. His brilliant mind and generosity knew no bounds.

Passing away at the age of 81 he leaves behind his loving wife Rajakumari, also a member of the Bar, his daughter Shobana and son-in-law Nitesh Malani. He was an exceptional grandfather doting upon his 2 grandchildren Dheeiya and Rohen.

Permit me to share an old adage about lawyers. “Old lawyers don’t die. They lose their appeal and fade away”.

His illustrious siblings are Dr Vijeya Segara an established medical practitioner in Sydney, his late sister Saroja and Dato K.N. Segara who retired as a Judge of our Court of Appeal.

To summarise Siva always believed that “only a life lived in the service of others is a life that is well lived”. He lived his life by this mantra.

The words are those of Mr Albert Einstein the famous Jewish scientist who cracked the atom.

In his life the “tongue of the good report was always spoken in his favour” and he was a “tireless advocate of goodwill to all and ill will to none”.

Judge not the man by the shoes that he wore but by the steps that he took.