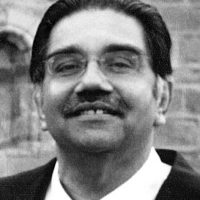 K S Narayanan was born in Malacca on the 9th of June 1946. His secondary schooling was at the Victoria Institution where he made a mark inter alia as a debater and as a thespian.

I pause to note that in spite of his having been my pupil-in-Chambers in 1969 and in spite of the fact that he and I had worked together as colleagues at the Bar and as close friends for many years, from early 1970, I had not known where Narayanan had had his primary school education. All was revealed when I recently learnt, from his daughter Priya Narayanan, that which had been kept not surprisingly as a close secret, that his primary education was at the Doughton Quarry Girls School in Madras, India!

Narayanan read law at the Faculty of Law of the University of Singapore. Among his contemporaries in Singapore who later reached eminence at the Bar in Malaysia were the likes of S Periasamy, Ninan Philip (of Johore Bahru), Tuan Haji Sulaiman Abdullah and Wong Chong Wah.

After his graduation, Narayanan turned up in early 1969 at the Chambers of the legal firm, Ng Ek Teong and Partners, of which I was the Partner in charge of litigation work, seeking to be accepted to read in Chambers. We were a newly constituted firm which could be described as a breakaway from the old firm, Braddel & Ramani and we were not ready, not equipped, to take in pupils. But Narayanan threatened to do a sit-down until we took him in! And so perforce he became my pupil-in-Chambers. After his call to the Bar on 23rd December 1969, he went on to work with us as a Legal Assistant and when I became the Firm’s Senior and Managing Partner, he became a Partner of the Firm, in about 1975.

Ours was what could be described as a boutique firm restricting ourselves to serious Commercial Litigation and Corporate work. The late C Selvarajah, later Tan Sri, was in charge of the Corporate work and I was in charge of the Court work, mostly commercial cases appearing in all of our Superior Courts, almost every other day, usually with K S Narayanan and sometimes with our other Partner, Vincent Ponniah, as my junior.

In the Law Reports of the 70’s, there are a number of important judgments that places on record that I had appeared for one of the parties as Senior Counsel with Narayanan as my junior, with formidable opponents including respectively, the likes of Lim Kean Chye, the late M Sivalingam, Tan Sri Cecil Abraham, Michael Mustill Q.C., Wong Chong Wah and Dato’ Dr Sir Peter Mooney, among others, leading for one or the other of the other sides.

On the 1st of January 1980, I was appointed a Judge of the High Court.

After continuing for a short while in Ng Ek Teong & Partners, after I had left the firm on my elevation to the Bench, Narayanan set up his own firm, K S Narayanan & Associates and rose in eminence as a Senior Advocate in serious commercial law cases. From the early 80s, we can see in the Law Reports, K S Narayanan featured as Lead Counsel in a legion of cases. I believe his practice by the late 80s consisted largely of appearing in one or the other of our Superior Courts as Senior Counsel on the instructions of other legal firms.

In the days that we practised together, Narayanan and I, if I may say so, made a formidable team. We were in Court on most working days and I have pleasant recollections of working with Narayanan and other members of our team at Ng Ek Teong and Partners into the early hours, at least two or three nights a week! I and our clients had the benefit of Narayanan’s acute, searching, disciplined, sharp, legal mind. Again and again he would discern in the problem at hand, an aspect nobody else had noticed, an aspect of the matter that could change and often did change a desperate situation into one that could and often did turn the tables in our favour!

Narayanan had a formidable memory and such an ordered mind that he could address the Court in the most complicated of matters without the use of notes, dealing with each aspect of the submission in an ordered and comprehensive manner relying solely on his memory. As I had mentioned earlier, in school and in University, Narayanan had been very much involved in theater, as a thespian, as an actor, and no doubt his training in the mastering of his lines, must have contributed to that formidable ability to have the issues in the case he was involved in and the arguments in support thereof, in a preplanned order, without notes, at his finger tips.

By the 90s, Narayanan was riding high, in among the top echelons of the profession, highly respected by his fellow lawyers and by the Judges.

What R R Chelliah, the then Chairman of the Bar Council said at the Reference in respect of one of our great advocates, S K Das and which I had said could be said of the late Khoo Eng Chin, can be repeated without fear of contradiction in respect of my friend, K S Narayanan:

He was not a showman who acted to the gallery. He never tried to bully witnesses or his opponent. He never raised his voice in Court. His advocacy was quiet and full of dignity.

K S Narayanan was very much a family man. He fell in love with the lovely and accomplished Tripat and ran into difficulties. While Tripat could not resist his charms, her father, Sardar Santokh Singh Godrei could and did! For a while. In spite of the training in the persuasive art of advocacy he received from me and the many years of successfully persuading Judges to agree with his submissions, it took Narayanan a good 7 years to persuade Tripat’s father to accept him as a suitable son-in-law! As Narayanan’s daughter, Priya put it, in her warm and moving speech, at the memorial luncheon organised by the family, Narayanan’s perseverance paid off “and my father eventually married the love of his life in a 3 month celebration”. Narayanan’s best friend was his wife, Tripat and he was a chum to his 3 children, Priya, Asha and Ram. He was shamelessly and vocally proud of Tripat and the children, proud of what they are and of what they had accomplished. The vivacious and lovely Tripat obtained her basic degree from the University of Malaya, in English Literature, and her Masters in Mass Communication and went on to earn her Ph.D., in films, from North Western University of Chicago.

Priya did her undergraduate degree at Durham, obtained her 1st Masters degree at the School of Oriental and African Studies, University of London and her 2nd Masters degree from Columbia. She now works for Astro.

Ram majored at Durham in Economics and now works for the Malaysian Transport Planning Committee.

K S Narayanan was also the de-facto leader of the wider Karumathil family and he had a close relationship with his brothers and his only sister and her family. Narayanan was an amiable soft spoken charming person and had a whole host of close friends from within and from outside the profession.

I respectfully offer our deepest condolences to Dr Tripat Narayanan, to Priya, Asha and Ram and to all the others near and dear to the late K S Narayanan.

In concluding this eulogy let me say that K S Narayanan was a good man whose love and respect for the members of his immediate family were reciprocated many fold. He was one of our great advocates. He had led a full and useful life and has gone on, leaving good memories. It can be said of him,

Our individual faiths should help us believe that,