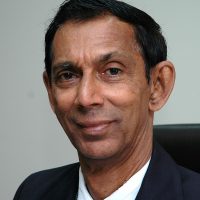 It is with deep regret and profound sadness that we inform you of the passing away of Mr. Hariram Jayaram, our founding partner and the heart and soul of RamRais & Partners on 9 November 2013 at the age of 75, quietly and surrounded by his family.

Mr. Hariram started his career as a teacher after he obtained his certificate in teaching in 1960. He subsequently pursued a law degree and completed his LL.B (Singapore) in 1970 and LL.M (London) in 1990. He was an Advocate & Solicitor at the High Court in Malaysia, an Advocate and Solicitor at the Supreme Court in Singapore, a Barrister, Solicitor and Proctor of the Supreme Court in Western Australia, a registered patent, trade mark and design agent, a Notary Public for the firm, an Arbitrator of the Kuala Lumpur Regional Centre for Arbitration, Fellow of The Chartered Institute of Arbitrators, United Kingdom and a mediator at the Bar Council. He chaired numerous Disciplinary Committees of the Advocates & Solicitors Disciplinary Board.

He was a member of the World Intellectual Property Organisation (WIPO) Arbitration and Mediation List of Neutrals since 1998, a WIPO Domain Name Panellist and listed as a WIPO Premium Name Expert. In 2002, the Kuala Lumpur Regional Centre for Arbitration (KLRCA) made him a member of its First Panel Arbitrators and a Domain Name Panellist. He was also a member of SIAC Regional Panel of Arbitrators. He decided over 49 cases involving domain name disputes for WIPO and 2 cases involving domain name disputes for KLRCA.

He lectured in a number of national and international conferences and was the author of relevant articles in specialised publications in the field of Intellectual Property. Mr. Hariram was also known for his charitable deeds both in Malaysia and overseas, particularly India. He became a master and a model for all of us for his wisdom, involvement, integrity and practical sense and remains the same in our hearts. He was highly esteemed, admired and respected by his colleagues, partners and staff.

He will always be remembered and deeply missed by those who had the privilege of living close to him for his commitment, ideals, hard work and loyalty.

The term ‘nature’s gentleman’ is a term that applies aptly to Hariram Jayaram. He was by nature gentle in both his personal and professional dealing with people. I came to know him more in the latter capacity. He was probably the earliest at our Bar to develop an expertise in intellectual property law. This branch of law, two decades ago, was largely confined to trade mark cases and the occasional patent infringement case. Hariram saw its potential as going beyond that and enhanced his expertise in this area.

He was ungrudging and unselfish about sharing his expertise with younger members of the Bar. When I was Bar President in 1997-99, he was our first port of call for talks to our lawyers on the developing law at that time on internet usage.

He was undoubtedly the pioneer of intellectual property law in Malaysia. I have no doubts that Malaysian legal history would recognise him for that.

The late Hariram Jayaram is best known for being simple, humble, honest and unassuming. It cannot be denied that he was an icon in the field of Intellectual Property law. Many would vouch for his ever willing attitude to help and impart his knowledge of the law to whoever seeks his assistance and advice.

Hari, as he is popularly known to many of us, made his mark in the field of Intellectual Property laws by the many papers that he had written not only at the local level but internationally since his admission to the Malaysian Bar on 18 December 1970. We shall miss this man immensely and the Malaysian legal fraternity has also lost a leading lawyer who is difficult to replace.

On a personal level, I came to know Hari when we were students at the Penang Free School before we moved on to further our education.

Hari was always a generous person inspite of being recognised as a leading lawyer having achieved a name for himself not only in the field of Intellectual Property law but is known for having practised in other fields of law, namely corporate, criminal and civil work during his lifetime.

We have lost a dear friend and a good lawyer.

May I join all our friends in extending our deepest condolences to his family.

It is with great sadness to have to inform our friends and colleagues of the passing away of Hariram.

It is most difficult to write this tribute to Hariram because, like so many, I am finding it difficult to come to terms on the passing of a dear and trusted friend.

I knew Hariram almost from the moment I joined the legal profession. I have worked with him in many matters, litigation and non-contentious matters, and non-legal work, for nearly 30 years.

Hariram was one of the founding members of Malaysian Intellectual Property Association (MIPA) and Asian Patent Attorneys Association (APAA) Malaysia Country Group. However, he declined to be the President of APAA Malaysia as he felt that he could contribute to the Association by being a “silent worker”. Hariram and his firm, RamRais & Partners have been a strong supporter and a good friend of MIPA and APAA for a long time. Caroline Francis of RamRais & Partners was MIPA Exco member, Honorary Treasurer, Honorary Secretary and Vice President respectively.

Hariram was also a founding member of Licensing Executives Society (LESM), Malaysia Chapter in 1992 but he declined to be the first President of LESM. He became the third President of LESM in 1994 where I had the privilege to serve as the Honorary Secretary of LESM. LESM has many members in Malaysia today.

Hariram was the first member of Inter Pacific Bar Association (IPBA) in Malaysia in 1991. On Hariram’s invitation, I became the second IPBA member in Malaysia. Again, Hariram declined to be the first Jurisdictional Member (i.e. equivalent of group President for Malaysia). Today, IPBA has a large membership in Malaysia.

Hariram had always been generous and kind in sharing his knowledge and experience with fellow practitioners in particular younger members of the Bar.

He never took advantage over fellow practitioners by reason of his knowledge, experience or seniority. He had always been ethical, a man of integrity, and always demonstrated respect and courtesy to the Bench and fellow lawyers. I have not heard him having said any bad words of any fellow lawyers. He was humble and unassuming throughout the years. There are so many good things to say of Hariram.

He was recognised as a knowledgeable IP lawyer locally and internationally. As we can see from Hariram’s CV, he had received many awards and recognitions by professional associations and publications. He was the first arbitrator and domain name dispute panellist appointed by the World Intellectual Property Organisation (WIPO) in Malaysia.

Hariram had expended lot of time and money on community work and charity including a charitable foundation for the poor children in India.

Few of us could emulate the good work Hariram had done.

Hariram will be missed by all those who knew him around the world but he will be remembered.

I have lost a dear and trusted friend.