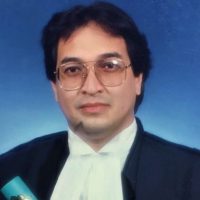 Being a headmaster, his late father carefully planned the education for all his children. It was trending in those days to send children to English-medium school. All the other twelve of his children were given English education, except for Nik Mohd Rasdi who was sent to a Malay-medium school. His father wanted him to be nurtured to, one day, become an ‘Ustaz’ (a religious teacher) or ‘Qadi’ (Magistrate or Judge of the Syariah Court). However, destiny has taken it course, despite of his father’s wish, Nik Mohd Rasdi has his own ambition to be fulfilled. He had successfully convinced his father to give his blessing for him to pursue the area of his passion.

Before entering university, Nik Mohd Rasdi attended high school at Kolej Islam Kelang (KIK) after his Sijil Rendah Pelajaran (SRP). Nik Mohd Rasdi was one of the KIK students who excelled academically besides being very active, among others, in English and Bahasa Melayu debate societies. He represented KIK in several debate competitions against other local colleges. He was also appointed a school prefect throughout his four years in KIK. Something he often shared with us was that, as a teenager and being a school prefect, he had no space to be mischievous.

In 1978, after his Sijil Tinggi Pelajaran Malaysia (STPM), Nik Mohd Rasdi was accepted for an undergraduate course in the Law Faculty of University of Malaya (UM) and graduated with an LL.B (Hons) in 1982. Shortly after graduation, Nik Mohd Rasdi commenced his legal career with the Judicial and Legal Service Malaysia as a Magistrate in Pasir Mas, Kelantan. Subsequently, he served as the Assistant Director of the Legal Aid Bureau before he decided to practise.

Nik Mohd Rasdi served his pupillage in the Chambers of Nik Saghir, Yaacob & Ismail. He was admitted and enrolled as an Advocate & Solicitor of the High Court of Malaya on 26 January 1985. He then worked as a legal assistant with the same firm until 21 April 1986 where he and his partner, Azmi Jaafar set up their own practice known as Azmi Jaafar & Nik Rasdi in the heart of Kuala Lumpur. Thereafter, he also served as a member of the Disciplinary Committee of the Malaysian Bar Council.

Not forgetting his late father’s dream and his interest in Syariah Law, Nik Mohd Rasdi, while practising, enrolled himself for an out-campus study and obtained his postgraduate Diploma in Syariah Laws and Practice (DSLP) in 1992 from the International Islamic University Malaysia (IIUM).

His passion for the law was such that he remained in active legal practice until his sudden demise on 5 July 2017. With a sudden short illness, Nik Mohd Rasdi returned to his Creator at the age of 58, surrounded by his loving family.

He left behind his wife, Wan Maziah bt Dato’ Haji Wan Mohamed, a daughter, Nik Sarah Heidar who has followed in his footsteps to become an advocate & solicitor and two sons, Nik Akmal Hareez, managing risk in an international oil and gas company, and Nik Akiff Daniel who will be sitting for his IGCSE ‘O’ Levels before pursuing his studies also in Law. He also left behind a son-in-law, Mohamad Saiful Dzulhelmi Zulkifi, daughter-in-law, Huraiyah Isry Ismail and two lovely grandchildren, Nik Nilofer Humayraa and Nik Ian Yousef.

May Allah SWT bless his soul, open the gates of Heaven and grant him the highest level in Paradise.