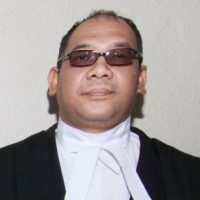 I had only an incomplete picture of Allahyarham. All that I knew from my limited time with him was that he was a Lenggong native, born on 28 July 1960. He was the tenth from eleven siblings.  He had spent most of his childhood in the United Kingdom, when his father was the Malaysian High Commissioner to the United Kingdom. He was a proud product of Malay College Kuala Kangsar or MCKK as it is usually known.

The practice of law was in his blood as his father, Tan Sri Abdul Aziz Yeop prior to his appointment as High Commissioner was a Magistrate and later, a lawyer. In following the footsteps of his father, Allahyarham went on to read law in Southampton University and was called to the Utter Bar of the Honourable Society of Lincoln’s Inn in 1984, as was his father before him.

On 13th of July 1985, after his return to Malaysia he was admitted as an Advocate and Solicitor of the High Court of Malaya and went on to take over the management of the legal firm of his father and uncle, Messrs Aziz & Mazlan. The firm, Messrs Aziz & Mazlan (as Messrs Razif Abdul Aziz & Partners was formerly known) was his life and pride.  He toiled tirelessly to return the firm to its glorious state, as it is today.

In 1986, he married Puan Zaiton binti Dato’ Jamaluddin and was blessed with two daughters, Nur Katrina, Nur Ellena and a son, Mohamed Ainal Ikram. His two daughters followed his footsteps and went on to join the legal fraternity as Advocates & Solicitors in 2010 and in 2016 respectively.

Despite all his achievements, health was not on his side and it steadily declined until his passing. Yet, not once did he abandon his pride and joy; his legal firm. He remained resolute even as his health steadily abandoned him. Ignoring the pain and affliction, he would totter out of the elevator, his arrival pronounced by the clacking sound his cane made as he slowly made his way into the office.

He was loved and feared by equal measures by his staffs but one thing he was not unkind. His kindness inspired fierce respect and loyalty in even the humblest of his staffs and his circle of friends.  He was direct in his speech and when you least expect it, would be laden with his own brand of humour. Conversations with him would always be educational, be it in matters of life or legal practice.

It has been his wish that his good work, his firm is to be continued, to be passed on from one generation to the next. His good work is now continued in the able hands of his family members.

To live is for us to accept the fact that time, our time, is finite. Yet to wish for more time is to be human. Indeed, we wish we had more time with him. Had he reached 15 November 2016, his marriage with Puan Zaiton binti Dato’ Jamaluddin would have been 30 solid years. Had he lived for one month and one week longer, he could have shared the happiness that is his first grandchild; Khalif Adzeen bin Muhammad Amir. Alas, might-have-beens and could-have-beens could not alter the fact that he had been called to meet his Maker and as bitter as it is, accept it we must.

He was a good husband, Papa to his children, the “Boss” to his staffs, a mentor to those who knew him as I did. He is no longer with us but his legacy will live on. He is greatly missed by all of us.

Goodbye, for now. May we meet again in the place where there is no darkness, InsyaAllah.