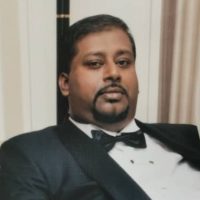 Gary was born on 16 April 1972 to Mr. Stephen Reginald Gomez (deceased) and Madam Hilda Violet Gomez. He would have been 50 this year. He comes from a family of lawyers, both his twin brother and younger sister being lawyers themselves. He even married a fellow member of the Bar. His passing was so sudden and unexpected, leaving a void in the hearts of those who knew and loved him. Gary had an infectious personality and a generous heart. Since his death, I’ve heard many stories from family, friends, and even clients of his kindness and generosity. He always lent a listening ear and a shoulder to cry on.

In his schooling years, he excelled in sports, badminton being his choice. He found pleasure in playing chess. Gary was an avid darter and did well in the pool, having represented the Kuala Lumpur Bar many years ago. He loved swimming as well. He slowed down in later years prioritising work and family life.

He doted on his only child, Jeremiah Gary Gomez, and never went to bed without making sure his son was safely tucked in bed. His one passion till the end was playing the guitar and singing. He surely had the voice to belt out many classic country and western tunes. On many occasions, he was asked to lead a sing-along. He obliged gladly and those were fun times.

He was a deeply religious man, teaching Sunday school in the church. I’m sure he made an impact on the youngsters as his students, young working adults now used to fondly call him ‘Sir’ when they met him. He always had some advice peppered with anecdotes for them and they always parted ways laughing.

Gary lived life to the fullest, joyfully, and most importantly with principle. He lived in the present and wanted to be a blessing to those around him. When I finally sat down to write this remembrance, I contacted a few mutual friends and acquaintances to have a broader perspective and all of them foremost mentioned his humour inadvertent or otherwise.

Gary was admitted as an Advocate and Solicitor of the High Court of Malaya on 5 September 2002 and after almost 15 years of practice, he set out on his own, establishing Gary Gomez & Co. To his staff, he was an easy-going employer and the office was constantly filled with good-natured banter. They remember him suddenly declaring the next day a holiday for the office and wishing them a day of relaxation and fun. They were ecstatic until it dawned upon them the next day was most definitely a public holiday. Needless to say, they were very vary of April Fool’s Day. He was dedicated to his profession and worked hard at success.

I have never met anyone else who had such a knack for making friends as Gary, even opposing counsels became good friends. He would always ask for the name of waitstaff at restaurants or retail staff at shops, always introducing himself first and making a point to address them by name until he left. He could carry on conversations with strangers like a house on fire. He had a special gift. He loved being around people and they in turn loved him.

Amazing people die too early. He led a life full of love, kindness, and laughter, leaving fond memories to cherish for generations. He wouldn’t have wanted us to cry over his passing but to cherish a life well lived. To me, tears are the love that has nowhere to go.