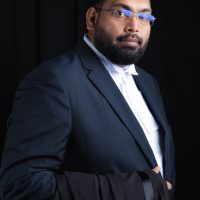 Ganeson Gunathan was born on 12 March 1987 in Ipoh. His late father Gunathan was a barber who owned a Barbershop named Kedai Gunting Ganeson. His mother Mdm Thanalectchumy was a housewife. Together, they had 4 children and Ganeson was their first.

He obtained a Bachelor of Laws (LLB (Hons)) degree from the Multimedia University of Malaysia in the year 2011 and was thereafter admitted as an Advocate & Solicitor in the High Court of Malaya on 10 September 2012. He was employed as a Legal Assistant at M Manoharan & Co.

With sufficient experience, he was able to practice in various areas of law. This then coerced him to enter into a Partnership with Gomathy Balasupramaniam to set up Ganeson Gomathy & Partners in year 2013.

Besides being a fearless Lawyer, Ganeson saw the necessity to serve the community. The life of a human being is incomplete if that life fails to be of service to human society. These were the words of Ganeson. He gave many motivational speeches to students at his primary school and also supported them financially. He always encouraged them to excel in life. He believed in sharing his thoughts and experiences with these young minds.

Apart from that, Mr. Ganeson was also a fervent believer of his religion. He shared multiple video clips and pictures in relation to his beliefs towards his religion via Whatsapp and Facebook.

Ganeson has lived the life he wanted – he served the legal profession well and was satisfied as a lawyer; he enjoyed friendship, and he also enjoyed sharing life’s experiences. Nature has taken Ganeson into its bosom, but it cannot erase the friendliness he has etched so deeply into the memory of each of his family members, friends, and closed ones.

While the late Ganeson was very driven to succeed, he never lost sight of other people’s need for success and recognition. He made it a point to nurture others. He was quite often unassuming, humble, and a very witty man full of humour. Those who know him will attest to this.

Everyone has the greatest admiration and respect for this man. His capabilities, tenacity, energy, and public relations skills with clients were beyond one’s imagination. The fire and desire within the late Ganeson probably explain and justifies how his firm was able to grow. Ganeson was also a kind and compassionate person.

Ganeson’s untimely demise is personally a big loss to everyone including his firm’s lawyers and staffs. He undoubtedly leaves a deep void in the lives of his family, friends, and closed ones as he was a very compatible, trustworthy, and capable person. The lawyers and staffs of his firm also miss his presence as well and are committed to keeping the legacy of their managing partner alive and strive to ensure that the firm of Ganeson Gomathy Fadzlin M Nava & Co continues to grow from strength to strength.

The late Ganeson leaves behind his widow Gomathy Balasupramaniam, his loving mother, brothers and sisters, and other relatives and friends including members of his firm to mourn his loss. All of them will always cherish his memory.

“No matter what, WE will grow together. We are equals.” these were the words often uttered to everyone by Ganeson.

And that was the life and career journey of the late Ganeson. “The man of a great embodiment of humility and leadership traits”.