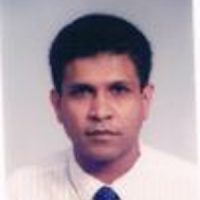 Ganesa K Sinnadurai was born on 21 May 1958, the fourth of five children, and the younger son. His primary school education was at St Paul’s Seremban and his secondary school education was at La Salle Petaling Jaya. After completing his secondary education, he worked as a law clerk in Messrs Ng Ek Teong and Partners from April 1977 until March 1979. He left in order to join the Polis Di Raja Malaysia, aided by a glowing reference from the Managing Partner of the firm, one Mr V C George, as he then was.
Ganesa served as an Inspector in the Polis Di Raja Malaysia for nearly a decade, attached principally to the Special Branch. In that time he made many fast friends, as could be seen from the touching farewell given to him by his former colleagues.

In 1986, he left the Polis Di Raja Malaysia to pursue a degree in law in England. In this, he was again assisted by a glowing reference, this time from Mr Justice VC George.

Ganesa was called to the Malaysian Bar on 23 October 1992. From then until 2009, he practised at Messrs Skrine, where he also underwent his pupillage under Lambert Rasa-Ratnam. During his time with Messrs Skrine, Ganesa was a member of the Construction Unit, learning his trade under the tutelage of Vinayak Pradhan. In 1996 Dato’ VC George joined the firm as a consultant, reinforcing the ties formed in the 1970s. After leaving Messrs Skrine, Ganesa joined Messrs T Ananthasivam. At the time of his passing on 3 June 2014 he was a Consultant with Messrs Tan Chun Hao.

As a lawyer, Ganesa was an active member of the Malaysian Bar, both as a sportsman and in later years as a member of the LawCare committee. In his early years of practice he was a regular participant at the Bar Games. He was liked and respected by many of his fellow lawyers, both for his dry sense of humour and his unswerving commitment to principle. As a lawyer, in his early years he was meticulous, painstaking and organised. A naturally modest man, he consistently underrated his own abilities and potential, sometimes to the exasperation of those around him.

Throughout his life, socialising and interacting with people was at the heart of what Ganesa did and was. Sometimes, this took the form of parties at friends’ houses, where he was a noted and sought after cook. Sometimes, it would be a road trip to the hills or to the beach. Sometimes it would be a raucous session at some bar or other. Sometimes, it was sitting in his garden, chatting over a beer, in the presence of his beloved dog, Rollo. He had the rare ability to connect with people from all walks of life, from which he formed many lasting friendships. His natural gift of empathy allowed him to see the good in those around him without losing sight of their limitations. His seniority and sincerity allowed him to point out those limitations in a constructive, albeit sometimes cryptic, manner. As a result, his opinions were valued and sought out, and will be much missed.

In his later years, Ganesa could reliably be found at Gills restaurant in Damansara Heights of an evening. It is no exaggeration to say that he made the place his own. When one wanted to find Ganesa, one called Gills – Ganesa refused to carry a mobile phone. The staff of Gills were devoted to Ganesa, and were devastated by his passing. Ganesa’s company and advice remained sought after to the very end. Many of his friends treasure the memory of his last trip to the 2013 Chartered Institute of Arbitrators Conference in Penang, where he was the life and soul of the party, and indeed made new friends. On his last weekend on earth, a group of his closest friends were able to persuade him to come out to lunch, and it is such memories, so reminiscent of his early years in practice, which help to assuage the pain of his sudden passing.

Ganesa’s smile was infectious, and he had a sense of the ridiculous, and of slapstick comedy, which still makes those who recall his exploits burst into uncontrolled laughter when the old tales are recounted. His chief love was football, in which he supported Liverpool and Brazil. He lived to see Liverpool’s implosion at the end of the 2014 season, but was spared the sight of Brazil’s drubbing.

Ganesa had a deep, even if somewhat cynical, understanding of human nature. He also had an unbending sense of right and wrong, and a willingness to speak his mind. This might have sometimes made him difficult to get along with, but his innate and obvious goodness helped those who knew and loved him to see past these difficulties. Even if he sometimes gave offence, it was always recognised that he spoke from the heart and without malice.

In the late 1990s, Ganesa was one of about 150 members of the Bar who requisitioned for an Extraordinary General Meeting. Ganesa’s standing among his fellow lawyers was reflected in his selection as one of three people who would discuss the requisition with the then office bearers, and make decisions on behalf of the requisitioners.

Ganesa was a hugely significant mentoring figure to many of his colleagues. Having been a mature law student, Ganesa was inevitably much older than his contemporaries at the Bar. This placed him in a unique position to be both a friend and a mentor to those younger to him in age but of relatively similar seniority at the Bar. His time as an Inspector in the Royal Malaysian Police force, combined with his relatively advanced age, made him street-smart, especially compared to callow youths fresh out of law school. His innate sense of fun made it easier for him to teach others what he had learnt without the student having to undergo the same school of hard knocks which Ganesa had gone through. As he grew in seniority, this same sense of fun prevented him from growing distant from the fresh waves of young people joining the profession, and ensured him a fond place in their hearts and memories.

Ganesa was devoted to his extended family. As a bachelor, he stayed with his parents until their passing, and is survived by his siblings, a nephew, Puvan, and a niece, Saveena.

As Winston Churchill said of FE Smith: Some men when they die after busy, toilsome, successful lives leave great stock of scrip and securities, of acres or factories or the goodwill of large undertakings. F.E. banked his treasure in the hearts of his friends, and they will cherish his memory till their time is come.

Along with the sadness and regret of Ganesa’s passing, we recall the joy, the laughter and the wisdom which he brought to us.