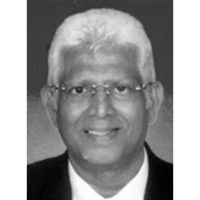 Sivalingam (Siva to his friends) was born in Ipoh on 18 October 1939. His primary and secondary education was in the Anglo-Chinese School there. His teachers had the highest praise for his scholastic abilities, the distinction he achieved both in the Inter-School Debates and as a lead character in the Shakespearean plays especially in his most memorable role as Henry the Fifth.

He joined the Faculty of Law in the University of Singapore in 1960. As a Committee member of the Raffles Residential Hall he saw to the welfare of its residents. He took an active part in the affairs of the University Law Society of which he became the President in 1963/1964. He was the first winner of the B.A.Mallal Moot Prize when it was inaugurated in 1963. And he was also the winner of the Leow Chia Heng Prize which he shared with Elizabeth Albyn Eber who soon after married his close friend and contemporary Chan Sek Keong who eventually became the Attorney General of Singapore. Another notable contemporary Dato’ Karam Chand Vohrah graduated with Siva in June 1964. After admission to the Malaysian Bar in December 1964 he became the resident partner of Lim Kean Chye and Sivalingam in Ipoh. His rise to fame as an Advocate was truly meteoric. Early on in his legal career he had already begun to lock horns with the giants of the Bar – Fred Arulanandom by then the doyen of the Perak Bar, N.H. Chan then already regarded as one of the better legal minds in the country, V.C. George then already the Chairman of the Bar Council, all of whom went on to become Judges and even D.R. Seenivasagam then already the President of the Ipoh Municipal Council.

Running alongside from the time he started were other legal luminaries like P.P. Dharmananda, N.T. Rajah, Lal Harcharan Singh, Hector Sankey, V. Moganasundram, and Rahim Noor to name but a few.

Ipoh those days was a colourful town not just for its highly-charged legal battles but also for the liberal consumption of spirits at the other Bars in the Ipoh Club and elsewhere which made their dents in those who did not have an iron Constitution or a Spartan discipline.

38 major cases in which Siva participated are reported in the Malayan Law Journals from 1968 to 2002. Each one sign-posts a significant clarification of the issue debated. Chang Min Tat J. (as he then was) paid some tribute to his advocacy when he said in Government of Malaysia v Gurcharan Singh (1971) 1 MLJ 211: –

If I have taken more time and space than I should have in setting out in such detail the arguments of learned counsel for the defence, it is because these are not without persuasion and force especially as there appeared to be some decisions, admittedly American, that a boarding school education, a higher education in a college……………… a five year course of instruction at a correspondence school had been held not to be necessaries.

I feel Siva’s demise as a personal loss. I had come to regard Siva not as a member of the Bar who appeared before me but as a friend. He had sought my opinion in one or two personal matters. And I had always looked forward to his appearances in Court. I don’ t believe I had given any guidance as such, it was only reply to his arguments. And so complete were his arguments that I was compelled to think, look up references and give what I hoped was a sensible answer. No client of his could ever say that his case was not fully represented and argued.

The climax of Siva’s early career at the Bar was surely his appeal to the Privy Council in Mahan Singh v Government of Malaysia [see (1978) 2 MLJ 133]. He was not daunted by the powerful judgements of Suffian L.P., Lee Hun Hoe C.J.(Borneo) and Ong Hock Sim F.J., who unanimously had held against him in the Federal Court [see (1975) 2 MLJ 155]. His final victory served his client but the law was amended to prevent the effect of the decision becoming a binding precedent.

The dismay with which Siva viewed the increasing politicisation of the Judiciary after August 1988 and his ruminations on the maxim, “Cessante ratione legis, cessat lex ipsa” contributed in no small measure to his departure from legal practice into the commercial world.

From his vantage point as director of several public companies including Mega First he moved into the heart of the corporate world when he became the in-house counsel to the K.L. Stock Exchange. As legal counsel for Multi-Purpose Bank he also oversaw its merger with several other banks.

He also involved himself in social work for the under-privileged both in his capacity as a Central Working Committee member of the Malaysian Indian Congress and as an active Rotarian.

Siva could easily have continued to live the life of unencumbered ease by remaining where he was but the anguish he felt at the loss of public confidence in the due process of the law drove him back into the rough and tumble of litigation.

One of the first cases he took upon himself after his return to legal practice as a consultant at Messrs Chellam and Wong was the case of MGG Pillai, a journalist against whom the first of what were to be many large awards of damages in respect of defamation had been made. It was apparent that the case would be conducted on a pro bono basis, and that a necessary precursor to any challenge to the sum of damages imposed would be persuading the Federal Court to revisit one of its existing decisions: a step which was, at that time, literally without precedent in Malaysia. The Pinochet decision in England provided the impetus for taking such a step here. Sivalingam was also of the view that the original decision was tainted by an apparent bias on the part of one of the Judges who appeared to have had an extraordinary relationship with counsel for the successful party who was himself a plaintiff in another defamation case and stood to gain by a precedent recognising absurdly exorbitant damages awards. He thus saw the matter in terms of an injustice which needed to be set right and thus devoted his not inconsiderable energies to achieve this.

Thanks in no small measure to the force of Sivalingam’s character, a diverse team of lawyers was assembled, and work began, which was ultimately to lead to the setting-aside of the Federal Court’s original dismissal of Mr Pillai’s appeal. Throughout the course of the work Sivalingam’s energy, commitment and legal knowledge were essential to progress and success. His constant awareness that all members of the team should be fully involved, and his openness to input from any source, regardless of seniority, was an exemplar of the principle that all members of the Bar stand as equals, and remains an inspiration to those of us who were fortunate enough to work with him. For all the members of the team, it was an all too fleeting an illustration of what the Bar has lost.

For his services to God, King and Country, Sivalingam was conferred the award of Datuk by His Majesty the Yang di Pertuan Agong on 5 June 2004. Datuk Sivalingam may not have known that he had not much longer to live whilst awaiting judgement in what became his last effort to restore lustre to the image of Justice for Boonsom Boonyant who had died heart-broken in her battle against Adorna Properties Sdn Bhd when the High Court in Penang found against her. Alas Datuk Sivalingam also failed despite his most valiant efforts to get the Federal Court to re-visit its decision which effectively divested the true owner of two pieces of land which had been stolen from her by an impostor and then subsequently sold to a developer whose claim to have bought them in good faith without notice of the fraud was upheld by the Courts. Mercifully Datuk Sivalingam did not live to hear the startling words of the Federal Court on the 27 August 2004 to the effect that the Court’s judgement though harsh, served no great injustice. Exactly a month before that on 26 July 2004, Datuk Sivalingam Munusamy had already passed on from life into legend.

Datuk Sivalingam is survived by his widow Datin Chelvi Sivalingam, his son Sanjeev who is an Accounts Manager in the Multimedia Development Corporation in Cyberjaya, his daughters Shireen who is a Human Resource Consultant in the UK and Varsha presently aged fourteen who is in the midst of her secondary education.