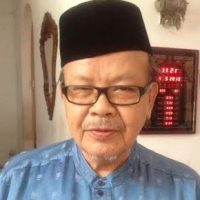 Professional, detailed, systematic, perseverance, thorough, determined, disciplined, refined, resolute… these were qualities, to name a few, of our late father, Dato’ Wan Nik bin Wan Ismail. He carried those qualities in his pursuit for excellence in everything he did, mostly everything.

He was born on 10 May 1933 in Kuala Terengganu, Terengganu. Second child to three siblings (from the fourth mother).

After completing his primary school, he went to Malay College Kuala Kangsar, a premier residential all-boys school which sometimes dubbed “the Eton of the East”. In 1955, he earned a Diploma in Agriculture from, then, College of Agriculture, Serdang, Selangor (now known as University Putra Malaysia). Ten years later he obtained his Barrister-at-Law from Middle Temple, Inns of Court, London, England.

He married To’ Puan Hjh Mariam Hj. Abdullah in 1953 and was blessed with eight children; four girls and four boys (eldest son died young). He was a strict and disciplined father to his children wanting only, but, the best in them.

Dato’ Wan Nik’s contributions in the growth and development towards national consciousness to industrialisation as well as his contributions towards Terengganu’s growth and development, did not end there. He was involved in the social and political arena as early as 1973 when he became the State Liaison Secretary of UMNO Terengganu, the Advisor for PELITA (Persatuan Sasterawan Muda Terengganu), the Patron of Youth Association ORKED, the Chairman of GABUDRA (Gabungan Badan-Badan Budaya Daerah Kuala Terengganu) and a committee member of UMNO Kuala Nerus, Kuala Terengganu, Terengganu.

In 1982, he was appointed as an Assessor under Section 40 of the Land Acquisition Act 1960 by the Malayan High Court.

On 23 July 1991, Dato’ Wan Nik bin Wan Ismail, was called to the Bar before a Supreme Court Judge, Dato’ Mohamed Yusof Mohamad, and became an advocate and solicitor – a practising lawyer.

A trained agriculturalist, a qualified lawyer, a Fellow of the British Institute of Management and a professional administrator, Dato’ Wan Nik bin Wan Ismail was a man of notable career experiences and achievements. His vast and varied experience had stood him in good stead to assume the top position of the pioneering team that built the Proton Saga within three years from DECISION to IMPLEMENTATION. The team that saw it through, from PROJECT PAPER to ROLLING CHASIS. In 1986, the Saga Pioneers Team earned the accolade of the Malaysian Business magazine’s “MAN OF THE YEAR” award. That was the most eloquent testimony to his career and contribution – the National Car – a shining symbol of achievement in the quest for Malaysia’s industrialisation.

To our late father, Dato’ Wan Nik bin Wan Ismail, his successes and achievements were a reflection of his beliefs and attitude towards life and responsibility. To him, there were no limits to his QUEST FOR EXCELLENCE. And to us, his children, that is one tough act to follow. AL-FATIHAH