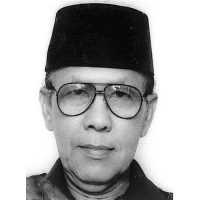 Dato’ Harun bin Haji Idris was born on 21 July 1924 and passed away on 19 October 2003. He leaves behind his wife Datin Seri Salmah Sulaiman, 3 sons, 3 daughters, 18 grandchildren and 4 great grandchildren.

I first knew the late Dato’ Harun in 1958 when he was a young Deputy Public Prosecutor. He became the Selangor Legal Adviser in 1960. The late Dato’ Harun had also been Director and Chairman of various private and public listed companies as well as had his own legal practice.

Dato’ Harun later entered politics and in 1964 he was appointed as Menteri Besar Selangor and held the post for 14 years. His term as Menteri Besar Selangor saw many important events that not only made history politically and nationally but also created landmark legal cases in criminal and civil matters. He was Vice President of UMNO and UMNO Youth leader. As Menteri Besar Selangor he made Selangor the most developed commercial and industrial state of Malaysia. He helped a lot of Bumiputeras in Selangor and Wilayah Persekutuan and elevated their economic status. He was Chairman of PKNS, Selangor which built the most houses for the poor in Selangor at that time and Chairman of Bank Rakyat which was then the biggest Bumiputera commercial institution wholly owned by Bumiputeras which gave hundreds of millions as loans to farmers, fishermen and rural people to help their economic progress.

His contributions in the field of sports were well known and outstanding. He was the President of the Football Association Selangor and also the Vice President and Manager of the Football Association Malaysia. Under his charge Malaysian football achieved great heights and Malaysia played in the Olympics. He brought the world heavyweight boxing champion, Mohamed A1i to Malaysia. In doing so Dato’ Harun had made Malaysia better known worldwide at a time when Malaysia was hardly known by the rest of the world. Dato’ Harun also started the first car-racing track in Malaysia at Batu Tiga, Selangor .

The late Dato’ Harun was a controversial but popular public figure. He was known to be a leader and a friend of the people and had helped many members of the public of whatever creed, culture or religion. His friendly disposition had gained him many friends and acquaintances. His absence is dearly missed but will never be forgotten by those whose life he had touched.