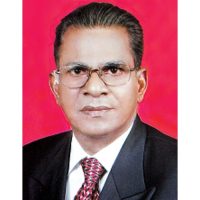 Dato’ S. Palaniveloo or S.P. Veloo as he was fondly known to friends was nature’s gentlemen. He had the gift of eternal youth and looked the part. His spontaneity and gaiety was infectious and laughter seemed always to surround him.

His loss is deeply felt by his children, brothers, sister and friends, a void that still remains unfilled. His guiding light and lodestar was his elder brother, Y.B. Dato’ Seri S. Samy Vellu to whom he remained devoted till the last.

He had very humble beginnings born to a lorry driver at Batu Arang on 23 July 1939. He lost both his parents at a young age. At 6 years of age he began working as a newspaper delivery boy and never stopped working till his death at the age of 68.

Schooling came in between guided by his elder brother. Upon completing his initial education, he went on to teacher’s training and was a teacher at the La Salle schools for about 10 years. That was when I first met him as my primary school teacher at St. John’s Primary. We were later to be classmates at law school in the University of Singapore about a decade later. We remained fast friends since.

He had a quiet determination about him never allowing setbacks to pull him down. He was extremely disciplined, and with his deep religious commitments, saw success and happiness in his legal career.

His abiding commitment was to his family, the late Datin A. Jayamanie and his three children. He rejoiced in the success of his children, the eldest S.P. Muthu Veloo who later became his law firm partner at Messrs S.P. Veloo & Co. His other son Dr. S.P. Sakthi Veloo and daughter Dr. S.P. Sivaghami were sources of great pride to him. But tragedy struck with the demise of his beloved wife in June 2003. He was never to recover from her loss. He became deeply religious and was easily spotted in Court as the man with the 3 stripes of the holy ashes on his forehead.

He quietly went about his work managing the branch office in Klang and lunching daily with a regular group of friends before returning home by late afternoon to an evening of meditation and prayers. It was a routine he was to keep till his demise.

His untimely departure from this world has left a deep vacuum. It can only be filled with the cherished memories of him dearly held by his children, beloved brother Y.B. Dato’ Seri S. Samy Vellu, relatives and friends. In the end there is realisation that it was a life well lived and served. In the immortal words of the poet Rabindranath Tagore ‘What was grief once, has now turned to peace’ (Lipika).