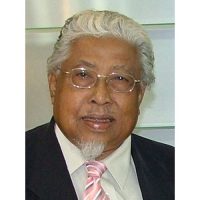 Dato’ Haji Abu Mansor bin Ali was born on 3 January 1936. He has had a distinguished career with the public legal service and the judiciary for more than 37 years prior to joining the legal practice.

Having been called to the English Bar (Barrister-at-Law, Lincoln’s Inn) in 1963, Dato’ Haji Abu Mansor began his career as a Cadet Magistrate and became the Circuit Magistrate and subsequently the President of the Sessions Court (1968). He then served the public legal service as a Deputy Public Prosecutor in Penang, State Legal Adviser for the States of Penang (1969), Terengganu (1970-1976) and Selangor (1977). While still in services of the Federal Government, he was called to the Malaysian Bar in 1981, at the same time he was the Head of Advisory Division and Civil Division of the Attorney General’s Chambers (1980-1984).

In 1984, he was elevated as a High Court Judge (Borneo and Malaya) and served at the High Court in Kota Kinabalu. His Lordship was later transferred to Johor Bahru and then Kuala Lumpur sitting in the Commercial/Appellate & Special Powers Division. In 1994, His Lordship was elevated as a Judge of the Court of Appeal and in May 1999, as a Judge of the Federal Court, the Apex Court in Malaysia.

Many of His Lordship’s judgments on election petitions are referred and quoted.

Up to his retirement, His Lordship represented The Right Honourable Chief Justice on the Legal Profession Qualifying Board, Malaysia.

Upon His Lordship’s retirement in January 2001, he joined the firm of Azlan & Loh in June 2001 as a partner and subsequently as a consultant to CW Loh & Associates in September 2003.

Dato’ Haji Abu Mansor was also registered on the Panel of Arbitrators for domestic and international cases with the Regional Centre for Arbitration Kuala Lumpur and a Commissioner for Oaths. In 2007, he was appointed as a member of the Kuala Lumpur War Crimes Tribunal.

Dato’ Haji Abu Mansor departed on 2 April 2008 leaving behind his wife, To’ Puan Hajah Faridah Mansor, his son and daughter-in-law and a grandson.

Written By,
To' Puan Hajah Faridah Mansor and daughter-in-law Nor' Ashikin Binti Abdullah