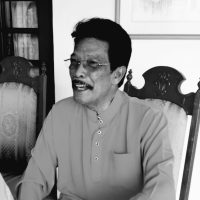 The late Dato’ Ghazi Ishak was a highly commendable figure, who has served beyond his call of duty. He was always composed and carried himself with immeasurable dignity.

He was born in Johor Bahru on 28ss June 1943 and was the eldest of four children of the late Haji Ishak bin Abdul Rahman and the late Hajjah Zainab binti Salleh. He received his early education at English College, Johor Bahru and he later went on to read Law at Lincoln’s Inn, London.

He was admitted to the Bar of England and Wales as a barrister of Lincoln’s Inn in 1971. He then joined the Government service and served as a Magistrate in Kuala Lumpur and subsequently, as Acting President of the Sessions Court in Malacca and Kuala Kubu Bahru. Despite his young age, he was an accomplished man. Notably, he was appointed as the Deputy Public Prosecutor in Penang in 1975, and later, acted as the Penang State Legal Advisor for a brief period of time.

Following his resignation from Government Service on 31 December 1976, he was admitted as an Advocate and Solicitor of the High Court of Malaya on 1 March 1977. Dato’ Ghazi Ishak then joined Presgrave & Matthews as a partner until he co-founded Ghazi & Lim in 1992.

He was known as one of THE most prominent litigation lawyers in Malaysia and was always seen as a ‘warrior’ in the courtroom, fully prepared to take on the ‘battles’ that came his way. Dato’ Ghazi Ishak was meticulous in his legal arguments and tenacious in arguing appeals. He was extremely focused and disciplined in his court preparations and was near-flawless in his advocacy skills. He would never miss going into office and demanded the same standards from his lawyers and staff.

He was a great soul of unmatched courage, integrity and honesty, and never wavered in his principles, acting always in the best interests of the client he represented, regardless of the matters which he worked on, or who the opposing litigant was against the client he represented; instances where far lesser individuals would have compromised on their values. The popular adages, ‘acting without fear or favour’ and ‘always try your very best’ are what he is remembered by his peers, to this day.

As a mentor and a friend, he was friendly and approachable, especially to the junior lawyers and staff. He was extremely generous in sharing his knowledge so that young lawyers could learn and benefit from his vast experiences. He was always polite and respectful to those around him. As an individual, he was compassionate, mindful of those less fortunate and he always had a friendly smile or a ready wave, to people he met. As a father and a grandfather, he was strict, but loving and approachable. He was a good listener, he appreciated hard work and was always ready with practical advice for all.

His passing is a tremendous loss to us and his memories will always remain with us. Thank you for your act of service, to us and to the legal profession, Dato’ Ghazi Ishak.