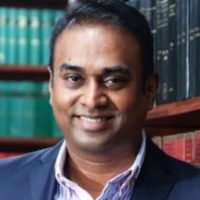 Dato’ Dr. Arunan Selvaraj holds a Bachelor of Laws (Hons), England and a Doctorate in Family Law. He was admitted as an Advocate & Solicitor of the High Court of Malaya in 1992.

With 27 years of practice, Dato’ Dr. Arunan is a specialist in Matrimonial and Family Law. He has handled an array of matters in the practice area of Matrimonial and Family Law including Adoption, Child Custody, Change of Child’s Surname, Divorce (Joint Petition and Contested), Spousal Maintenance, Property Division, Private Probate, Management of Private Companies, Wealth Accumulation and Preservation, Finance Management, Wills and Insurance.

Under his leadership, Rusmah Arunan and Associates, the Firm that he established was awarded the Matrimonial & Family Law Firm of the Year consecutively in 2017 and 2018. Dato’ Dr. Arunan was also declared the Managing Partner of the Year 2019 at the ALB Malaysia Law Awards 2019. Rusmah Arunan & Associates also won the ALB – Dispute Resolution Boutique Law Firm of the Year 2019 recognising Dato’ Dr. Arunan’s commitment to saving marriages and reconciling couples with troubled marriages who came to see him. Dato’ Dr. Arunan gave his best and always strived to resolve the disputes in relation to divorce, matrimonial and family law matters that came to him in the most amicable manner. Every client was given specialised and personalised attention.

Dato’ Dr. Arunan also continued to do pro bono work whenever invited to do so by the Courts or by the Legal Aid Centre for those with financial constraints. He worked closely with the Legal Aid Centre and often supervised visits for young lawyers to the Prisons to ensure that legal assistance was made available as much as possible to all in need.

Dato’ Dr. Arunan created legal history for Malaysia when his firm was the first firm to file an action in the Courts and obtain settlement for a client following the MH370 tragedy.

A Man of Many Talents – Dato’ Dr. Arunan is also the author of the book entitled “Saving Your Marriage”, a book that encompasses the rudiment details of marriage and divorce. In his book, Dato’ Dr. Arunan shared his experience. He had just completed his second book which was to be published soon, a task which will be undertaken by his loved ones.

Dato’ Dr. Arunan has been invited to appear as a guest on numerous television programmes including Astro Ria, TV3 and TV1. He had accepted many speaking engagements to speak on an array of subjects which include law reform, entrepreneurship, being positive and living better lives. He had published many articles in relation to marriage and relationship which were carried by the News Strait Times and The Star. Dato’ Dr. Arunan had also been featured in The Caliber Magazine, The Newman Magazine, The Health Magazine, Marie Claire, Her World and CSR Malaysia. Dato’ Dr. Arunan was the Speaker representing Malaysia at the 7th LawAsia Family Law & Children’s Rights Conference. He had also conducted seminars and given talks on marriage and relationship and various other aspects of law.

Besides being a law practitioner, Dato’ Dr. Arunan was also a passionate man and believed in giving back to society especially to those in need. He had worked closely with various NGOs on charity projects. His notable projects to raise funds for cancer patients include Trek Everest Base Camp which successfully raised over RM150,000.00, Trek Mount Kamchatka & ‘Jom Botak’ raising funds of over RM300,000.00 and ‘Movember- Ultimate Shave Off’ raising over RM200,000.00. All the funds raised were channelled to the cancer patients.

‘Puncak Harapan-No Mountain is Too High’ was a project led by Dato’ Dr. Arunan with his team of 10 hikers where he and his team took along three mentally handicapped students from Wisma Harapan for an expedition to scale Mount Kinabalu. It was a project initiated to raise funds for the mentally handicapped kids and adults in Wisma Harapan – SAMH and to realise the dreams of the kids to scale Mount Kinabalu. The Selangor and Federal Territory Association for the Mentally Handicapped (SAMH) received a donation of more than RM100,000.00 through the project.

Dato’ Dr. Arunan led his team in yet another noble project ‘Stronger Together’ which was a two-part charity project to raise funds and create awareness about Children with Cerebral Palsy and Gabungan Anak-Anak Palsi Serebrum (GAPS). The project successfully raised funds of RM100,000.00 which was channelled to GAPS.

The SAMH Charity Balloon Run 2019, a project to raise funds and create awareness for the Selangor and Federal Territory Association for the Mentally Handicapped which Dato’ Dr. Arunan had planned and organised, proceeded on 22 December 2019, after his demise on 19 December 2019.

On the bright Sunday morning of 22 December 2019, more than 1000 participants gathered together to show their support via donations and participation to raise funds for the benevolent cause of this run. Despite the merriness of the event, the absence of the late Dato’ Dr. Arunan whose semblance is kindness was greatly felt. Even in the wake of his passing, his vision and legacy will survive in perpetuity.