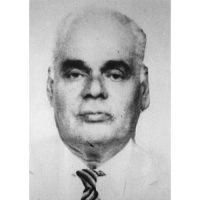 The late CKG Pillay, CKG as he was affectionately known to all his friends and colleagues at the Johor Bar, was born in India on 20 March 1926. He was educated in his early life in India and came to Malaysia in 1945. He studied law in England at the Middle Temple and was admitted to the English Bar. He was thereafter called to the Malayan Bar in 1962, after doing his pupillage under the auspicious chambers of Mr Goh Bin Lay, one of the pioneers at practice in the State of Johor. He then set up his practice under the style of CKG Pillay & Co. For several years his practice entailed both criminal and civil work. His work then took him to all the smaller townships in Johor very regularly as there were few legal firms both in Johor Bahru and the out-lying towns. To consolidate his growing practice he teamed up with the late Mr Keith Sellar and Mr HL Tennakoon as Keith Sellar, Tennakoon & Pillai and later known as Sault Keith Sellar & Co. In 1979 he joined Hassan Yunos and Co where he practised till 1991. In 1991, he decided as part of his retirement plans to move to Kuala Lumpur and started his new practice as CKG Pillay & Partners. Being no stranger in name in practice, his firm undertook more solicitors work but he never denied himself to selective appearances in the appellate Courts when the occasion called for until his demise on 24 April 1994.

I have had the privilege of knowing CKG Pillay for 16 years, when I first moved to Johor Bahru in 1978. During that period my respect and regard for him had grown. I am not alone in stating that besides being a pioneer and senior in practice at the Johor Bar, CKG was unassuming, humble and always cordial to the Junior colleagues. He respected all juniors in the profession and had on occasions sat through their trials in Court to offer advice on the manner of cross-examination.

His advice on such occasions were not laborious. He would just pose one or two questions to the young and inexperienced Advocate that would serve as a guide to the issue or to the manner to approach the Court in their submissions. He was a voracious reader, whether it be a novel or some serious literary work. He had a gift of ‘speed reading’ which he never gloated on. His love for literature and reading culminated in his contributions to the public by being a well known columnist on the law for layman, first in the daily “The Star” and later in the “The New Straits Times” .

His contributions to the “The Star” ended when “’Operation Lalang” was undertaken by the Home Ministry and what was discretionally considered did not permit the daily to have the licence to publish articles of interest in the interim. It was then, when the New Straits Times offered an avenue to continue his contributions in respect of the law for the general public.

His choice of leaving Johor Bahru to practise in Kuala Lumpur was already seen as a loss among the practitioners in Johor Bahru, although he had expressed this as part of his retirement plan. He had two children in Kuala Lumpur and the grandchildren to be with. The late CKG Pillay worked at his office until his demise in 1994. Quiet, humble and unassuming, he earned the respect not only of his colleagues but the members of the Judiciary. His literary contribution in the widely circulated dailies were even a greater contribution which the public will never forget.