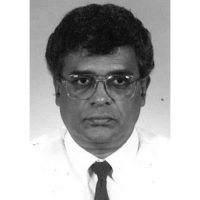 Chrysanthus Romauld Lopez, popularly known as Chris Lopez, was the voice over Radio Malaysia’s Blue Network, as listeners tuned in to hear the English news on radio in the 1960s. He was a knowledgeable conversationalist and a voracious reader on the subjects of politics, psychology and literature, which most likely fuelled his interest to study law in the late 70s. In the years that followed, with much determination, he attended night classes to pursue a law degree while working full time at RTM to support his family of a wife and two children. In 1985, he graduated with an LL.B (Hons) degree from the University of London. He went on to complete his CLP at University Malaya and was called to the Bar on 22 March 1986.

Thereafter, on 1 April 1986 he was appointed as a magistrate with the Kuala Lumpur Sessions & Magistrates Court. Later he also served as a magistrate in Kuala Kubu Baru and Shah Alam. On I February 1992, he was transferred to the High Court (Civil Division) of Kuala Lumpur as a Senior Assistant Registrar where he remained until his retirement. During his tenure on the bench, he dispensed justice without fear or favour and with unwavering adherence to the law and the constitution. He judged with efficient firmness and integrity, yet with great compassion for the innocent and afflicted who came before him. His bold professional style earned him the respect and admiration of members of the Judiciary, the Bar, the Police force and the public.

Upon his retirement on 25 October 1994, he entered into private practice and joined a partnership. In 1996, he started his own law firm of C.R. Lopez & Associates. As a lawyer, he took great pride and commitment in his work. An observer once remarked that he tackled the most difficult cases with the skill of a “carver’s knife to a python”.

As he enjoyed the success of his firm, he also gave generously to two charities namely the Montfort Boys Home and Hospice Malaysia. By nature, he had a strong, charismatic personality and possessed a joyful zest for life. He was also a warm, generous and tender-hearted man who believed and lived the principle that everyone should be given a second chance.

He was committed to helping educate the common man about his legal rights and was invited to speak on small claims procedures at conferences organised by the Consumers Association. Being a skilled writer, he contributed articles and opinions on like matters for the press, the Law Faculty of the University of Malaya and local journals.

On 19 November 1999, having reached the prime of his life well lived, he passed away peacefully at the age of 60, leaving behind many to mourn the great loss of a good man.