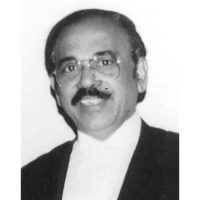 Chinniah Ahnantakrishnan known as Ananda was born on 8 January 1934 in Ipoh, Perak.

In 1947 when his late father had retired from the Malayan Railway Administration, his father took the family to Sri Lanka where Ananda completed his School Certificate.

Ananda returned to Malaya in 1956 where he secured a position as a clerk with the Central Electricity Board. Later, he was appointed as an Administrator in Singapore, with the Malayan Railway (now known as Keretapi Tanah Melayu). While in service, Ananda had a burning desire to pursue his academic ambition to become a lawyer.

Ananda married Sarathamani Kandasamy, a teacher on 25 August 1963. They were blessed with two daughters and two sons.

Finally, at the age of 42, Ananda took the challenge and left for the United Kingdom to read law whilst being on leave of absence from his employer, Keretapi Tanah Melayu.

On 25 November 1980, Ananda fulfilled his ambition and was called to the Degree of the Utter Bar by the Honourable Society of Gray’s Inn, United Kingdom.

Ananda returned to his former position as a clerk to complete his services with KTM. Whilst still working as a government servant, he chambered at Skrine & Co. and was later admitted as an Advocate & Solicitor of the High Court of Malaya on 23 June 1982.

Having taken optional retirement from KTM at the end of 1983, Ananda started to practise law with Skrine & Co. Later he joined Rajasooria and Sons to gain experience as an Advocate and Solicitor in a small firm. On 1 April 1985, Ananda established his legal firm Ananda & Co. in Brickfields, Kuala Lumpur where he continued to work as an Advocate and Solicitor till the very end.

Ananda had always been concerned about his community and his culture. He had been an active member of the Ceylonese Provident Fund (CPF), the Jaffnese Co-operative Society (JCS), and the Jaffnese Co-operative Housing Society (JCHS), and was the President of the CPF from December 1991 up to the time of his death. In addition, Ananda served as a Committee Member with the JCS from November 1991 until February 1997. He was a mover and a shaker within the organisation, protecting the benefit of the organisation and the community through his initiatives by being positive and progressive.

The message to Ananda’s family during his funeral was that he had been an advisor to friends, relatives, clients and anyone who confided in him.

May His Soul Rest In Peace.

With deepest love, fondest memories and utmost respect for a great man who lived with dignity and integrity to the end.