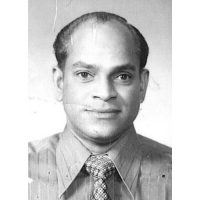 Chelliah Navaratnam, born on 17 September 1930, was the sixth of thirteen siblings. A former student of King George V, Seremban, he graduated with Honours from the University of Malaya at Singapore in 1962.

This former Negeri Sembilan King Scout was a keen cricket player, who also played for the Perak Bar Cricket team. He first had aspirations of becoming a doctor, however due to financial constraints had returned to Malaysia from Australia, abandoning his dreams of becoming a doctor after three years of study.

He began his legal career in 1963 under the pupillage of the late Mr R R Chelliah in Kuala Lumpur and was called to the Malaysian Bar on the 3 January 1964. Soon thereafter, he moved to Ipoh and joined the firm of Gibb & Co specialising in insurance law and and criminal law and earning a reputation as an outstanding litigator.

It was probably in Court whilst cross-examining doctors that Chelliah Navaratnam was most at home – putting his eloquence, his mastery of the English language and his medical training (albeit short lived) to his advantage – often leaving many a doctor called as witness puzzled and impressed at his vast knowledge of medicine.

Unlike others, he did not endure life but instead celebrated it with the simple but straightforward approach that many could only envy and hope to copy. A fun loving man whose easy-going personality made all who came in contact with him comfortable with him, and, more than that, he with them, no matter what age. The everlasting testimony to Chelliah Navaratnam, his life and his most cherished legacy will probably be his conversation with a friend just prior to his passing when he said, “I am a contented man”.

Chelliah Navaratnam passed away on the 30 January 1991, leaving behind his wife of 29 years, Sarojanee Thambypillai and four children – Malini, Balachandran, Devindran and Dharmendran.

In a career spanning almost three decades, Chelliah Navaratnam remained and will be remembered as a formidable but worthy opponent, with a deep sense of respect and loyalty towards the Bench and the Bar alike.

A good and reliable friend to his colleagues, with an enviable youthful sense of humour; honesty, respect and integrity were the cornerstones of his life and that which guided his career as a lawyer.

Written By,
Family of the late Chelliah Navaratnam