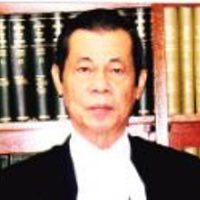 Cheah Kam Chiew was born on 7 November 1936. He studied at Methodist Boys School, Kuala Lumpur. Worked briefly as a teacher before leaving for England to study law at Lincoln’s Inn. He was called to the English Bar in 1966 and the Malaysian Bar in 1967.

KC as he was fondly known, served his pupillage under Tan Sri PG Lim. Tan Sri Lim was the country’s first Woman Ambassador to the United Nations and concurrent Ambassador to Yugoslavia, Austria, Belgium and the European Economic Community.

KC assisted PG Lim in the defence of 11 Malaysians who were sentenced to death for consorting with Indonesian forces during Confrontation. The death sentence was eventually commuted to life imprisonment following appeals to the Sultans of Johor and Perak.
KC made his initial foray into politics by joining the then Labour Party. He represented detainees who faced political repression, assisted detainees who were denied family visits/lawyers’ visits.

He was a fearless advocate for justice, human rights and a just society.

He assisted the family of Lim Soon Seng, a Labour Party activist who was shot dead by the police before the 1969 general elections. He represented the late Lim Soon Seng’s family in seeking redress.

1. Petronas’ rescue of Bank Bumiputra
In September 1984, Petronas bailed out Bank Bumiputra as its subsidiary, Bumiputra Malaysia Finance (BMF) had lost RM2.5 billion in Hong Kong. The country’s largest bank had to be rescued. KC challenged the legality of the takeover as it was ultra vires the Petroleum Development Act 1978.

In May 1985, the Government rushed through Parliament amendments to the Petroleum Development Act to give retrospective effect giving Petronas powers to acquire Bank Bumiputra. KC was forced to withdraw his action.

2. EPF Case
In 1986, 4.8 million EPF contributors were worried about the management of EPF funds amounting to RM24 billion. The EPF Board allegedly refused to give a full and detailed accounting as to how it invested its funds.

KC said, “As a trustee, the board must furnish to fund members (who were beneficiaries) information and full accounts on demand as to the method in which their contributions have been invested and where they were. Alternatively, the board should give the means of obtaining such information”.

KC lost the case which case was before Justice Dato’ Harun Hashim. Gopal Sri Ram was his Counsel in both the public interest litigation cases.

Political Career
KC was passionate about politics. Although he contested and lost five times in the General Election, he never gave up. He was an indefatigable advocate for the poor, marginalised and the oppressed. He contributed much to the Labour Party (previously) and the DAP.

Bar Council
KC was actively involved in the Bar Council and also served on the Selangor & Federal Territory Bar Committee from 1980 to 1983. His collaborators at the Bar Council were the late Raja Aziz Addruse, Param Cumaraswamy, amongst others. He was also in its Human Rights Committee (HRC), assiduously assisting the HRC in taking up human rights issues.