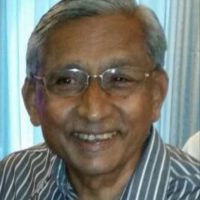 Chandra Kumaran Kurup was a noble and well respected lawyer whose career was remarkable for its diversity. Besides running his legal practice for 40 years, he was a former Chairman of the then Selangor & Federal Territory Bar, and served as one of the Chairmen of the Disciplinary Committees under the Advocates and Solicitors Disciplinary Board.
He is also remembered for being the legal expert on the Radio RTM talk show titled “The Law and Us” which aired in the 90’s. It highlighted his passion for the profession as the show helped provide the common man with a clear understanding of legal matters – a rarity in those days.
All this he achieved with characteristic vigour and dedication, always relishing a challenge and he continued serving the legal interests of his clients until he passed on in Subang Jaya, Selangor on 18 October 2016 aged 72.

Outside of his practice, Chandra spent most of his time with his family. Somehow, he always found the time to have a chat with his wife and children after a long day poring over cases in the office or defending a client in Court. His passion was the law, but he never forgot the people that were precious to him. He enjoyed family trips, especially those that involved travelling abroad. He was especially fond of watching plays in the various London theatres, and had a fine appreciation for museums and historical sites.

The eldest son of 10 children (five girls and five boys), Chandra was born on 2 August 1944. His father Kumaran Kurup was a hospital assistant by profession and owned a dispensary in Senai, Johor. Following the death of his father early in life, Chandra was left to care for his widowed mother Janakiammal Raman and his siblings.

Completing primary school at Ngee Heng Primary School, Chandra went on to complete his secondary education and Higher School Certificate at the English College in Johor Bahru. He read Law at the University of Singapore, graduating with an LL.B (Hons) in 1971 at the age of 27.

Called to the Malayan Bar on the eve of Christmas 1971, he practised under the guidance of Dato’ S.P. Seenivasagam. Following S.P. Seenivasagam’s demise, Chandra established his own firm, Messrs K. Chandra & Co. in 1976 at Jalan Hang Lekiu (formerly Klyne Street) in Kuala Lumpur, serving clients from all walks of life over the next four decades.
Chandra was a familiar and regular sight in both the Criminal and Civil Courts.

As an advocate, his success was based on meticulous preparation and a plan for understanding and execution of complex transactions. Chandra was never one to be aggressive when facing opponents in Court. His approach to cases was a simple one; always go back to basics.

One of his finest achievements during his early years as a lawyer was when he appeared before the Privy Council in the United Kingdom, together with English instructing solicitors Coward Chance, while still a junior lawyer in 1975.
Despite his serious approach to work, Chandra was a good natured and jovial character. His peers fondly remember him as a friendly and humble person, never arrogant and always having time for his friends. Chandra was always forthcoming with his legal experience and knowledge and enjoyed sharing stories about the “good old days” of the Bar.
His personal life was no less fulfilling than his professional life. He married Indira P.D. Nair in 1975. They raised four children – sons Pravind and Prashanth and daughters Anushka Prashalini and Tasha Prasheela – three of whom followed in his footsteps to become lawyers themselves. Perhaps surprisingly, Chandra never pushed any of children to do law, he always believed that one had to have one’s own conviction and passion to embark on a legal career. However, he took great pride when his youngest, Tasha joined him as his legal assistant in early 2015, and it is fitting that, by taking over Messrs K. Chandra & Co., she now carries on Chandra’s great legacy. Prashanth is a solicitor in London and Anushka is a regional general counsel in Singapore. His eldest, Pravind is currently completing the Bar Vocational Course in London.
Chandra was a hardworking and dedicated lawyer, but above all, he was a loving husband and proud father. He was, without a doubt, happiest among his family members and friends. He is survived by his wife of 41 years, their four children and his brothers and sisters.