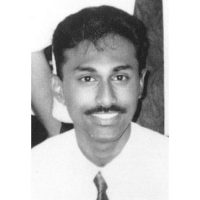 Krish or Bala to those who knew him personally was born 18 April 1970 to Mr Shanmugam and Madam Saroja.

Krish commenced pupillage in the chambers of Rajadevan & Associates between 1997 and 1998 under the guidance of his master, Mr V Rajadevan. He was a hardworking and dedicated pupil and shouldered responsibilities well beyond his years. He was admitted as an Advocate and Solicitor of the High Court of Malaya on 23 October 1998.

Krish started practice as a legal assistant at Ganesan K & Rakan Rakan until 1999. He then moved on to T K Ooi Loo & Partners on 1 September 1999 and remained in the said firm until 10 April 2000 when he was forced to stop due to medical reasons.

Krish loved outdoor activities like camping, travelling and enjoyed volleyball. He had a ready wit and a keen sense of humor and was popular with one and all.

Krish passed away on 9 October 2000. He is survived by his parents, siblings and a very dear friend, Sathia Stella. We all miss him very dearly.